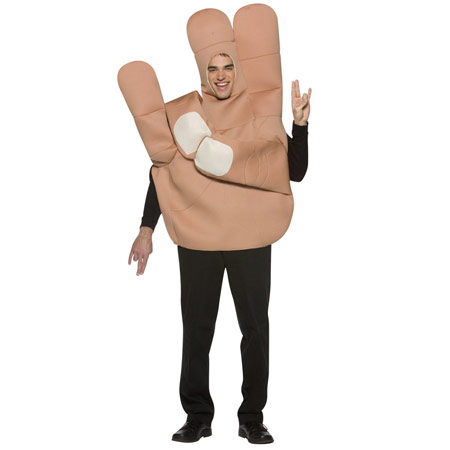 Shock the crowd this Halloween!

With your amazing "bowling" talents. You'll be a league all your own this Halloween! The Shocker Adult Costume includes: A tan hand shaped tunic with three fingers up. Guaranteed to be a crowd pleaser this Halloween!

Zackula: This joke just keeps getting funnier every time I see it made by someone I coincidentally want to drive over with a truck.

Dr. Thorpenstein: "Ha! Check it out, bros! I'm the thing we all did in our school yearbook picture that got Coach Patterson fired! Woooooo!"

Zackula: Even worse than this costume is that a bunch of people will probably tell this guy that it's hilarious at the party.

Dr. Thorpenstein: The hideously shortened digits on this costume are sort of reminiscent of a baby's hand, aren't they? A baby giving the shocker. A baby putting two fingers in a vagina and one finger in an anus.

Zackula: And the worst part of all is the fingers make it harder to decapitate this guy in one stroke when you inevitably attack him from behind with a machete.

Dr. Thorpenstein: Yeah, it would be kind of a complicated stroke, but I think it's doable, and I think the added challenge just augments the satisfaction you'd feel afterwards.

Dr. Thorpenstein: When you kill a guy like this, you don't even get the whole "oh God, I've killed a man" thing, you just sit down, light up a cigarette and wait for the cops.

Zackula: By the way, someone actually posted a photo of their husband wearing the costume in the reviews: http://reviews.buycostumes.com/3993/32214/photo.jpg

Dr. Thorpenstein: It's even more horrible and shapeless in the photo.

Zackula: I would like to see that guy cornered by the potato guy.

Zackula: Potato guy walks him into a corner, little arms waving, backing him up against the yard's privacy fence, and everyone wonders what's going on back there in the corner and then when the potato turns around a half-digested skeleton falls to the ground.