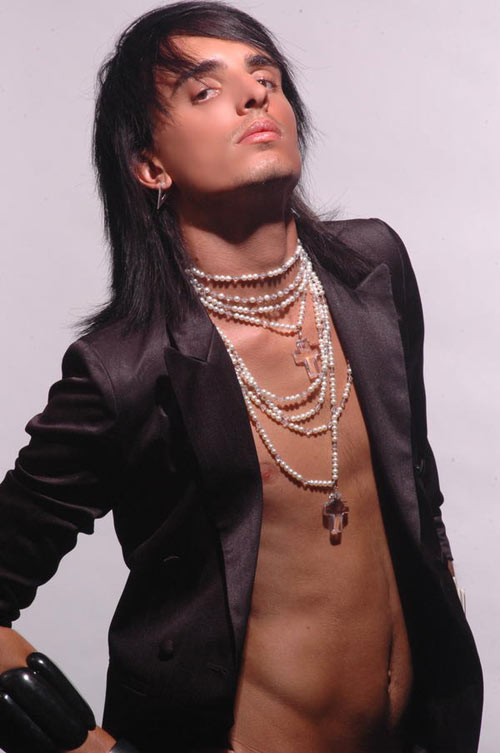 Josiah Reed
Defining Quote: "I like visually stunning people with something to say, purpose in there walk talk, the real deal, a sense of conceptual uniqueness, personal style with a touch of the bad that is so bad at times its almost good, people who are anti anti-hype, originality, you!"

Zack: How do people like this even come out of North Carolina? That's like a huge gaudy Christmas tree topper just randomly appearing in a lava flow.

Zack: You've got to admit that utility bracelet thing he has on is pretty awesome though. I wonder if it shoots sleep darts or maybe like ejects a smoke screen so he can escape when he's outnumbered. "I knew I shouldn't have tried eating at Applebees! Josiah vanish!" Pssssssssshhhhh!

Dr. Thorpe: Maybe he can shoot little nets out and catch "visually stunning people with something to say" and bore their heads inside out with tales of $300 skin cream.

Zack: I think all the visually stunning people would say "let me out of this net!"

Dr. Thorpe: Maybe it's got a little pops-a-dent in there to occasionally fix his concave nipple.

Zack: Nah, usually for that he'll just remove the entire panel and pound it out with a sledge.

Dr. Thorpe: He's got to be careful not to chip the fiberglass.

Zack: That's the thing about modern models. They've got much higher safety ratings but the damn impact panels always crack so you have to replace a 2500 dollar panel instead of just pounding a ding. Which, coincidentally, is what he spends most of his free time doing.

Dr. Thorpe: I wonder how much the mechanic charged for that "smart blur" job on his face. I did that to my Honda to get some rust spots out.

Zack: I'm still sort of curious about what he means by "visually stimulating people". Is he looking for someone whose skin is just a giant shifting fractal or maybe one of those magic eye pictures. He'll be blowing some dude in a nightclub bathroom and suddenly a penguin or a balloon will pop right out in 3D.

Dr. Thorpe: I think that happens anyway when you do mix special K with amyl nitrates. Perhaps he means he's looking for someone who'll provide the compassion and encouragement he needs to wear an eye patch for a few weeks to encourage his lazy eye to focus better.