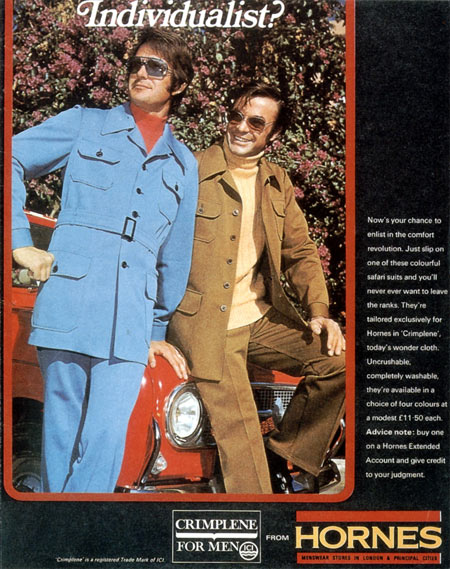 Zack:Individualist seems like one of those words that are hard to turn into an interrogative with the addition of a question mark.

Dr. Thorpe:These cats aren't just individualists, they're enthusiasts. Unlike the last one, this doesn't look awkward at all. These guys are naturals. They love a good leisure suit. Combine that with a classic car and they could stand in front of a hedge looking smug all day.

Dr. Thorpe:He's filled with mischief. It looks like he's just caught a foxy young thing checking out his creases.

Zack:I imagine these guys spending all day driving around in their Mini Cooper occasionally stopping to get out and pose at things like canyons, bikini contests, and a harbor full of yachts. "Tad stop here. These people need us."

Dr. Thorpe:I'm glad you said that, because I was just trying to figure out the circumstances under which two gentlemen dressed like this would drive around together in the daytime.

Zack:They're a part of Individualists Without Borders and they're driving around South America spreading individualism to the impoverished natives. "Sorry no, no polio vaccine, but look..."

Dr. Thorpe:Trying to put these guys in some kind of context other than doing what they do for its own sake is a fool's errand. I think we're seeing every facet of their personalities in this photo. Nothing's hidden.

Zack:Oh yeah, I agree, their job could not possibly consist of doing anything more than they are in this photo. This is IT. This is what they are best at, and they know it. When you have a gift you don't waste it doing things like building houses for Habitat for Humanity or working in a soup kitchen. You pull up next to a bunch of refugee tents and pose on the hood to inspire those who need inspiring.

Dr. Thorpe:Well, I can picture them doing minor job-related things beyond what we see in this photo. Like tossing the keys to some starving child and going "park the car, son." They don't even have to entertain the notion that the car might get stolen, because it must just seem impossible. It's part of them. It would be like stealing their heads.

Zack:Have you ever been to Aspen? If you have you might rethink "Individualist". There are 20,000 of these guys in Aspen at any given moment. Like Robert Evans walked into a cloning machine that launched clones directly into a tanning booth. Any bar you go into there will be a dozen guys in oversized sunglasses, turtlenecks, and leisure suits drinking hot toddies and talking about how much powder they caught.

Dr. Thorpe:Their turtlenecks are to hide the hickeys The Man gave them. Jesus, look how many buttons those jackets have.

Dr. Thorpe:"I can look all breezy and leave this thing unbuttoned if I want... but once I button it, nope, you're not getting in here."