Fall is upon us, and you know what that means. No, not a seasonal change accompanied by the fluttering of red and gold leaves through crisp air that compels you to snuggle up in a blanket and sip hot cocoa from the ear canal of a loved one. Not the arrival of new television shows to break the monotony of the summer, either. It means it's time to read a middling internet humorist's take on those very same new Fall shows! 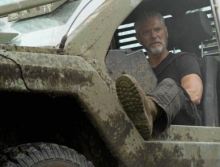 When it comes to science fiction, I'm an eternal optimist. While the first episode had some super cheesy family drama and its pacing seemed as though a ten year old was breathlessly telling a story bridged by a hundred "AND THEN"s, I'm going to foolishly hope for the best. After all, this show has time travel, dinosaurs, visible lasers, and cool open-air architecture.

You know how American Idol is rife with overproduction, staged melodrama, smugness, and meaningless platitudes taking the place of genuine human emotions? The X-Factor makes American Idol look like Once. This show doesn't just think it's the best thing on television, it is absolutely sure, and it doesn't even feel the need to waste its time proving it in any way whatsoever.

Pan Am / The Playboy Club

Do you keep hearing good things about Mad Men, but have a hard time understanding subtext or any aspect of entertainment that can't be described as "badass" or "sexy"? Here, have some of this bullshit, which is also set in the '60s. Enjoy these shallow programs until you find yourself mysteriously bored after a few episodes.

Remember how Christina Ricci turned in such a strange and impressive performance in Black Snake Moan? It seemed as though she would never portray another character that had sunk so low, but then she played a sexy stewardess in Pan Am. You see, these aren't flight attendants, they are wide-eyed intercourse beings in a glamorous era of sex and airplanes, and their antics will warm your heart.

The Playboy Club is little more than pornography for people who can't use the internet, can't buy a Playboy magazine, and can't be bothered to change the channel to the Food Network.

How far can the charms of Zooey Deschanel carry a series? We're about to find out, as this show has absolutely nothing else going for it. 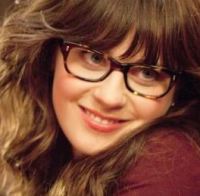 Thirty minutes of this, and other faces designed to make people go "DAWWW!"The premise is that an attractive woman has moved into an apartment with three men. She is quirky and awkward, but they put up with her because she has model friends. There. That's the idea, and really the entirety of the show. That was barely enough to fill one paragraph even after expanding upon the idea, and it was still a little light.

So far, Zooey just sort of... does things. They aren't particularly clever things. They're just things that you would attribute to a clumsy person or a third grader adjusting to social interactions. Maybe she falls down. Maybe she sings something at an inappropriate time. Maybe this keeps happening for the duration of the show and you feel like you're an alien when people say "Hey that show wasn't so bad!" on the internet.

Imagine Sarah Silverman with half the talent and twice the aggressive sexuality. Now think of the soul-destroying American sitcom parodied in the Dane Cook episode of Louie, mixed with the "men are always insufferable idiots that need to be reprimanded by their wives" mentality that drives every single commercial on television. Sounds like fun! If you have a medical condition that causes revulsion to be interpreted as fun, that is.

It is an AMC show. Their track record is just silly. Even their canceled programs make most network series look like middle-school plays. Hell On Wheels follows a former Confederate soldier tracking down his wife's killers, set against the 1860s backdrop of the Transcontinental railroad. We might have been cheated out of a satisfying conclusion to Deadwood, but this will do, even if it will have 1000% fewer cocksuckers.

If Kill Bill took place in the Hamptons and replaced most of its violence with rich people raising their eyebrows meaningfully, it would look something like this surprisingly fun show. As the lovely and talented Andrew "Garbage Day" Miller pointed out, "Never have I seen so many broad smiles slowly fade to non-smiles in one TV show episode!" 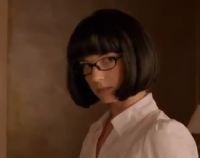 At one point, the main character (a beautiful woman with blonde hair) decides to "disguise" herself by putting on a short black wig and glasses. As you can see, it totally works.

This same move has been done countless times before, and invariably it makes the actress way more attractive. Ladies, if you ever feel like your look is in a rut and you're at a loss for alternatives, go with the "disguised leading actress" angle for $20. If you gave a guy the same amount of money to change his look for the best, he'd be hard-pressed to come up with much beyond a bow tie or maybe a novelty Groucho Marx nose.

An investigator uses perfect recall to solve cases by honing in on obscure clues. I'm glad this series came along, because it's a great way to remind everyone that Psych is still on television.

Twin sisters, green-screen boating, and mysteries. Perhaps a few too many mysteries, and not enough of a setup. Either way, I'm hanging in there to see how this turns out. It seems as though the presence of Sarah Michelle Gellar has trapped me, perhaps as some sort of residual effect from Buffy. The same thing almost happened when Alyson Hannigan started on How I Met Your Mother, before that show's terrible "keep moving and no one will notice this isn't actually funny" pacing snapped me out of the spell.

A teenage girl sees everyone in the suburbs as drones while she is unique and also a better, more complex person because she is snarky. In other words, a series with a healthy message, and not a calculated rehash of a thousand movies and shows that count on their target audience being too self-absorbed to see through the pandering.

A remake of the 1970s show that's sure to have the same success as the remakes of The Bionic Woman, The Fugitive, and Knight Rider. The original series had a little bit of depth and chemistry, which is being replaced this time around with slow motion and high definition.

Ben from Lost and Jesus from Passion Of The Christ team up to stand around in trench coats and engage in mysterious conversations. Did that sound negative? Because it's not. I will genuinely watch that shit all day. Make Person Of Interest a 24-hour network and it will replace ESPN as the thing I keep on as background noise while I work.

As interesting as this seems, it can't possibly live up to the "Ben & Locke: Antique Pickers" show that will never happen.