Reading Time: 'Fantastic Four in the House of Horrors' 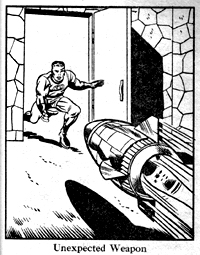 In human houses, you must punch the door, not even so much that it breaks, but until it makes a loud noise called a "knock." This sound scares away evil. If you enter a room without a knock, it is considered rude, and you might be punished with unexpected weapon. 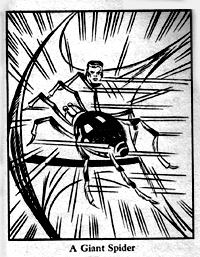 Because of unexpected weapon, this human only has a head left. But this radioactive spider will bite it, and then it will become a hero head, which will float around having adventures. 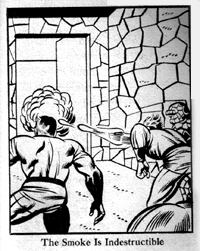 You cannot throw fire at smoke balls, because it will pass out the other end. You can't punch smoke balls either, because your fists will do nothing and this is embarrassing. Smoke balls are the worst form of enemy. 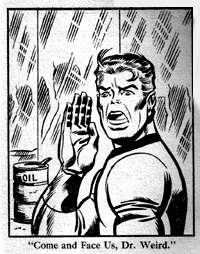 This man has been trapped in a room with mirrors for a long time. He doesn't know Dr. Weird has died and is now harassing Statue and woman with his vengeful tombstone. This man has survived by drinking oil like a robot. 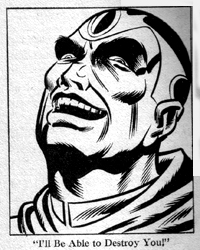 The Satan has distracted these heroes with his smoke and the mirrors. But Statue and Statue's woman and Head will keep looking for him, because I don't think they're dead. Or maybe this will be my top-secret mission!

The True Lesson is that humans live in Houses of Horrors, and it is the hero's duty to subdue and demolish every object within their walls. Also, Satan lives, and I will find him. Thank you.

Physically, General, he's ready for service. But I find his mental instability troubling. Stevie still responds to stimuli he doesn't understand with violence, and he hasn't fully tempered his hostility toward humans.

Son, out here in the real world, we need people with quick aggressive instincts, people with motivation for confrontation, kick ass first and ask questions later. He sounds like a goddamn godsend. Send him up!

Stevie, Outside has expressed interest in your unique qualifications. We cannot begin to describe our pride in your achievements! Also, we cannot discuss your revised objectives. You shall continue your education by correspondence, but in addition to your Reading Tasks, please submit field reports. It is time for you to put your schoolbook learning into practice. You will help thwart the villains. You will become a True Hero.