The exchange point is a foot bridge crossing what was once the Rio Grande. In the middle of the foot bridge is a fat countermeasure arch that will prevent non-citizens from crossing into the United States. Down the shallow banks there is a piss trickle of brown water threading between rocks.

On the opposite bank is a row of tan military vehicles and soldiers wearing balaclavas that hide everything but their eyes. Spinoza pulls us right up to the edge of the bridge. The men across the bank keep their long arms lowered, but one twitch and they could light us up.

"I'll make the exchange," I say and begin hauling Herrera out of the truck. "Keep an eye on Vargas. I don't want him getting out of that seat."

Spinoza gets out of the truck and stands behind her open door, watching me and Herrera make our way to the bridge. Across the span are two men in uniform. One is wearing a balaclava and carrying a briefcase, the other is a gray-haired old man with a hooked beak of a nose and a gray mustache. General Valdez. He stands at ease with his hands locked behind his back.

"Meet in the middle," I shout.

Valdez and his man start across the long bridge.

"They really going to kill you?" I ask as I start Herrera moving towards the arch.

Herrera shrugs. His expression is relaxed. We walk a few more paces in silence and he asks, "Do you have children?"

"Hard to find daycare in a war zone."

Herrera looks at me, squinting one eye against the sunlight. His smile is genuine.

"I saw enough death in the slums of D.F. to know that I would not live forever," says Herrera as he plods along beside me. "I accepted this. When my son was born I looked down at his face in the crib and I knew he would die also. This was even more difficult to accept. When my grandson and granddaughters were born, and I was the old man beside you now, I knew that I had it wrong. I am already gone. My heart is in their precious flesh and blood, and will be in those that are born after them. What I am cannot die so easily. What is a bullet to that power? What is torture? I am already free."

We stop on the Texas side of the arch. 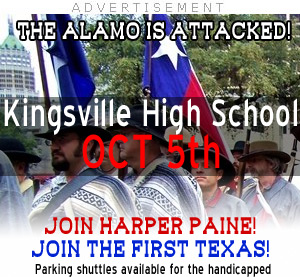 "Let them have my bones."

The two men arrive on the other side of the arch, staring at us from across the deadly gulf of two feet. The man with the briefcase snaps it open and shows me the stacks of blue hundred dollar bills. He holds it like that. I unlock Herrera's cuffs and nod for him to go. He surprises me by reaching out and taking my hand, looking into my eyes for several seconds before releasing my hand.

He crosses the border to meet the officer.

If they're going to pull something, it is going to be now.

I take the briefcase. No gunshots ring out.

"Yes, a pleasure doing business, Yankee." He takes Herrera by the elbow and leads him towards the vehicles. I get a last glimpse of Herrera, sitting beside the window, as they pull away. There is no bag over his head. No handcuffs on his wrists. He smiles and waves. The dust swallows the convoy of departing vehicles.

I'm pretty sure I just made a big mistake, but I can't say I know exactly why. As I arrive at the back door of the truck, I get the start of an answer. The Buick that Vargas barricaded at the fairgrounds is driving towards us at high speed.

"We going to make a run for it?" asks Spinoza.

Too late. A light helicopter swoops in, a teardrop-bodied Little Bird with a suppressed engine package, rails laden with men. The downwash batters my clothes and whips Spinoza's black ponytail into a flail.

I set down the briefcase and slowly take my guns out and put them on the ground. The helicopter bounces down and back up again, leaving behind four guys, bad asses with field beards and dew rags over their heads. Their gun rigs are wrapped up in camo fabric. They're all wearing leather jackets and paratrooper boots, but that's the end of the uniform. Lots of chain and spikes and other personal kit that would make more sense on bikers.

They take us down fast. Spinoza and I give it up without a fight, Pike mouths off and gets a rifle butt in his face. He falls to the ground and starts screaming. One of the freak squad guys drops a knee into Pike's back to pin him and another secures him with quick-tight manacles. Despite the irregular look, there is no wasted movement with these guys. They are high-octane operators, flag patches on their arms, skull-headed warrior babe on the backs of their jackets. I didn't even know the USA still made guys like this.

"Runner," one of them says.

Vargas has bolted from the truck and is running at full sprint towards the banks of the Rio Grande. One of them raises his rifle and thumps out some sort of non-lethal from the under-barrel grenade launcher. Vargas throws his hands in the air and disappears, out of control, over the bank of the river. A few minutes later, as we're being loaded into a truck, there's Vargas, dusty and scraped, drooling like an idiot, but otherwise unharmed.

"Where are you taking us?" demands Pike.

A man looms into the open door of the truck and pops Pike in the mouth. Just a quick, hard jab. Knocks him out cold. The guy standing in the door is one of the two from Herrera's chase car. A burly guy stuffed into a blue suit. His hairline is an eroded cliff of black and his pronounced five o'clock shadow and dark circles under his eyes give me the impression he hasn't slept in a week.

"You stupid assholes," says the man. He slams the door closed without further explanation. I hear him pound on the roof of the truck and we're off, swallowed up by Texas dust as we're whisked away to our fate.