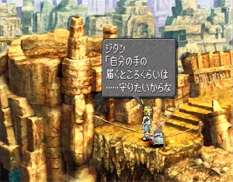 In this scene, Zidane is making Vivi his bitch.The card game also makes a triumphant return. Since I had no idea how to play it, I consulted my instructional manual and found this excerpt:

It’s just like the story of the grasshopper and the ant. The grasshopper was responsible and saved his food for the winter, while the ant was a gangster and got all the female ants in his neighborhood pregnant. He paid for the child support with drug money by selling crack to the grasshopper.

With that in mind, I challenged a townsperson by hitting the “square” button instead of “circle”. I quickly realized this card game was nothing like the one in FF8 and I lost my Ramuh card almost immediately. Apparently there are “combos” you can get when you flip another card over and its arrows touches another card's arrows. This might seem simple, but even after 50 games of playing the only way I win is by sheer luck. This major flaw is made up for by the return of “lovable” characters, meaning they aren’t angst ridden or speak as if acting in a soap opera. There’s witty and clever dialogue like, “this cowgirl’s wilder than a buckin’ bronco!” or, “He’s an oglop? What the fuck happened?” or, “Beware the power of the crystal! Don’t inhale them all at once or you’ll overdose!”

By far my favorite character is Quina. He reminds me of that fat green King Gungan in Phantom Menace, “He shall be puunee-ished.” He joins your party for the amazing reason of... wanting to eat more food. What depth! With a tongue as long as his I bet he’s real popular among the ladies. Whatever he says, it’s constantly far more entertaining than Vivi’s self doubt, Zidane’s attempts at flirting, and Dagger’s whining about how her mother is not evil. Quina should’ve been the main character.

Maybe the experience isn’t the same since I’m older, or maybe I’m just a little more cynical about life in general after falling for countless links that only lead to goatse.cx, but this Final Fantasy perhaps should be the final one, finally (ed note: haha, yeah right!).