Oh no, who stole our textures? We need to hire JESUS, PRIVATE EYE to solve the crime!Level five is where I lost it. I knew it was a bad sign when the grinning used car salesman appeared in the beginning, accompanied by a completely NEW and DIFFERENT dog than before! Where did his old dog go? Who knows! After looking around, I realized that God has apparently declared the act of texturing walls to be a sin, as the entire place was just a bunch of brightly colored rectangle blobs. Perhaps the old dog committed suicide after seeing the place he would have to sit around in for all eternity, waiting for me to solve a series of moronic jumping puzzles and multiple choice questions written by retards. I don't blame him. The car salesman demanded I "YIELD (let go) my RIGHTS to worldly pleasures, because I belong to God." Come on, Hummer Software! If I'm playing this game and I've made it to level five, you can safely assume I've given up all hopes of obtaining worldly pleasures. My only concern at this point was having enough active braincells left to remember how to successfully quit the game.

I crossed the hallway and entered into a room full of lavish riches and graphics that looked like stuff the Whammies from "Press Your Luck" were always trying to steal. Large cauldrons of gold, bags of "$" signs, and treasure chests that seemed to be full of corn filled the room. However, I had to jump from ledge to ledge in order to avoid getting rich, as trying to take the gold sent me into a pitch black room full of yellow plane runways and broken down Jeeps. You know, like in real life. This taught me a valuable lesson about trying to get rich and made me realize that by failing to be paid by dot-com companies for the past two years, I was actually being done a favor. Thank you, eFront Media, for keeping me from ending up in a dark room with broken Jeeps! I didn't have the patience to traverse the narrow yellow paths so I jumped off and was given the following inspirational message:

I took the screen's advice and decided against the worldly pleasure of knowing I had beaten this game. As if on cue, the game crashed and took me to my desktop, where I used my holy delete key to remove all traces of this game from my impure harddrive. After all, I didn't want my life fading away or any of that shit. Hell, I HATE broken down Jeeps. I convinced some of my forum members to actually beat the game, and somehow they were able to. Here are the ending screens, complete with their accompanying worldly pleasures: 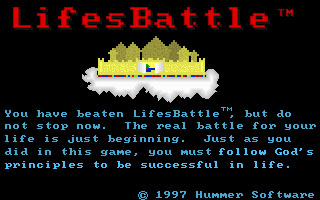 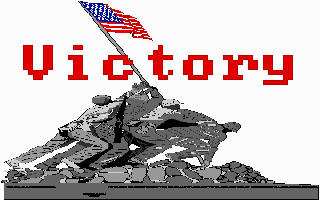 Hooray for God! And America!

So did Hummer Software succeed in their goals? Not really, as I still can't even name any Christian principles I was supposed to learn offhand. Heck, I can't even remember what religion this game was originally about; I originally guessed Hinduism. I really can't imagine who would willingly play this game except the programmer and his halfwit kids, and even then I would assume a constant looming threat of harsh beatings would be necessary. I didn't learn anything about religion, I didn't learn anything about God, I didn't have fun, and the creepy-ass graphics have been burnt into my mind for all eternity. If that's not the hallmark of a successful freeware game, I don't know what is. Needless to say, this is pretty bottom of the barrel, even when compared to all the other filth reviewed on this site. Avoid at all costs, unless you REALLY want to see a pixelated horse command you to jump over words. If that's what you're interested in, I would instead recommend dropping acid and watching "Mr. Ed" reruns. That show has significantly more worldly pleasures and less broken down Jeeps.