At a Glance: Uh, well, I guess there was some kind of "project" and it involved the "undead." That project, much like this game, failed on a spectacular basis. 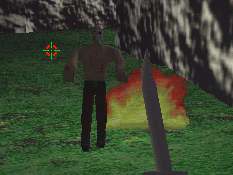 Oh no! Run! It's... it's... A FIRE!!!When I first read about the upcoming mega smash hit Project: Undead on the front page of The Seattle Post Examiner newspaper, I couldn't help but do a double-take. Why was a national newspaper like The Seattle Post Examiner writing about some obscure game called "Project: Undead"? Why did the screenshots of the game look as if a sixth grade student took his Halloween drawings, crammed them through a fax machine a few million times, and then scanned them into an Apple IIC? After a few hours of creative brainstorming, I came to the following conclusions:

While none of these facts helped explain a good majority of Project: Undead, they did help me figure out why I mistakenly confused the 3D Files.com website for The Seattle Post Examiner, a newspaper which to the best of my knowledge, does not exist. The descriptive blurb of "creative writing gone horribly wrong" that accompanied the game download was enough to win me over and immediately download the sucker. Get ready for some literary lovin', folks:

Claire Stockwell inherits a mansion somwhere in the country. Soon after they moved in, she an her husband John encounter strange sounds and voices. One night, there are strange people outside the house, so John decides to go outside to see who they are. But he does not return...

Claire tries to phone the police, but they just laugh at her. So she phones her brother, Jake D. Fens to come at once. Jake takes a cab to the mansion, but the only way to the mansion goes over a bridge, and this bridge is broken. So he decides to walk and look for another way to the mansion.

Jake D. Fens locks and loads his 9mm. Ready for anything. And that's exacly what he should expect, anything... 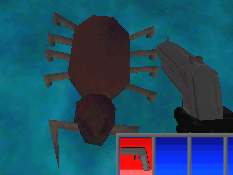 This is a bug hunt, man!

Ooooh, spooky! I think that might've actually been copied and pasted from Stephen King's latest eBook! Unfortunately, nobody in the entire world has ever read an eBook, so I cannot confirm or deny this notion. Stephen King or not, the author does a wonderful job in setting up the "backstory" of the game, which is a term we game designers use to refer to "the story which should take a back seat to everything else in the game, including box design and the coupon that falls out of the instruction manual, offering 30 hours of free playing time on America's #1 most popular online shuffleboard network." To sum up it for you, let me provide the major details:

WHO: Claire Stockwell, her husband, and Jake D. Fens. Claire used to be named "Claire Fens" before she married her husband, John Stockwell, so we can safely assume that she is incredibly skilled at realizing when her last name is really fucking stupid. Back in junior high school, I bet hundreds of kids beat the snot out of Jake D. Fens. Hell, I bet hundreds of junior high school kids STILL beat the snot out of him.

WHAT: There is apparently a project, one that involved (or still involves) the undead. I assume Claire wasn't aware of this project or else she would've moved somewhere safer, like Palestine, which has a significantly smaller number of undead (plus they don't have voting rights).

WHEN: Sometime after "the invention of mansions" and before "the destruction of the universe." I don't think I can get more specific than this.

WHERE: "Somwher" in the country. Which country? One that is "somewher" in the world, I assume.

WHY: I don't think this game is prepared to answer this question.