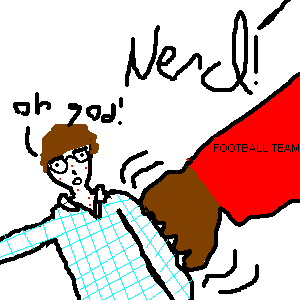 The beauty of the first Halloween was how random the events were, and how tense and suspenseful the execution was. The plot wasn't anything special, he kills his sister for no reason on Halloween and 15 years later comes back to kill his other one the same way. The guy is given just the slightest backstory so you can project all your worst fears onto him. I don't have anything against remakes but I doubt Rob Zombie can make a movie about the random boogeyman who kills for no good reason any tenser or scarier. The original Halloween like the original Psycho hasn't aged well because society has a whole has become much more desensitized. Not to mention both films have been borrowed from heavily throughout the years. To the point now where filmmakers rely on gore to shock and rile up audiences. How does Rob Zombie plan to bring anything new to the table? A loud crash or Michael Myers suddenly appearing out of nowhere won't be enough and buckets of blood and limbs flying everywhere will just elicit a groan for him copying Texas Chainsaw Massacre. He might have been better off remaking something he could have done gorier, because making something more psychologically terrifying isn't his speciality.

That's the entire point.
That's what seperates Meyers from other 80's serial killers. He had no point. He wasn't big and bulking, he didn't have any supernatural powers, he wasn't abused as a child, he wasn't a zombie retarded man with a crazy mother.
He was a normal kid that snapped for no reason and was just plain, pure evil that couldn't be stopped. That's what makes Michael Meyers different from everyone else.
Every sequel diluted him further and further to the point in which he was just Jason part 2 (I hate every sequel, really - I can tolerate H20 since Meyers was Meyers in it; but that's about it).
In the first movie, he was a kid who denied every serial killer standard and origin. He was a kid who was just pure evil, and decided to kill people for no reason whatsoever. He grew up, carjacked someone, and then decided to stalk and kill more people for no reason whatsoever. And for some reason, he couldn't be stopped.
It started getting dumb in part 2. Instead of being happy just killing people efficiently after stalking them, he had to get creative and try to rival Jason in elaborate deaths. He got some dumb backstory about Celtic symbols, and he got a motivation by retroactively making Laurie Strode his sister. As sequels continued, he got more and more dumbed down and stupid. 4 made him able to teleport around, 5 introduced stupid cults and made him a victim of some stupid passed down curse and made him cry at the end because he didn't want to be what he was. 6 made the cult even stupider. Fortunately H2O retrofitted 4-6 out of the series, but them Resurrection came out and ruined that by having him run away from Busta Rhymes because he told him to leave the house.
Now, with this retrofitting, he's essentially Jason or Leatherface or Angela from Sleepaway Camp or Freddy or any other myriad of slashers. They all have the same stupid backstory about being abused as children in one way or another. It's old, typical, and stupid, and that's really what set Meyers apart.

Alright, tonight was the night where I snapped.
For background information on my "friend" check my history posts, but long story short, I snapped tonight at 2:00 AM after coming back from a strip club.
For the past few years, I have been paying for EVERYTHING me and my "best friend" do together. I would pay for his meals, I would pay for his ticket at the moviese and I am sick of it.
I have spent over $5,000 on his ass in the past 1 year alone! I would pay for everything always because he would bitch about not wanting to come out if I didn't and the only thing I ever asked in return was for his friendship. And let me remind you, that this guy is 100 times richer than me but still makes me pay for EVERYTHING or he won't be my friend.
Lately, he's been joking around a lot by saying I am not your friend anymore and then when I would ask him why and what did I do, he would just say nothing but I love to make you worry about that because I valued our friendship a lot. I have known him for 12 years.
Last night while at Dennys, he jokes and says he doesn't want to be my friend and if he could intervene 12 years ago when we met, he would. Even though he's joking, he never admits it unless I get it out of him - so you would think that he wasn't lieing if you didn't know us or met him for the first time. It's so sick the way he's used me.
Finally, today coming back from a strip club - I finally woke up and snapped. While there, 2 strippers asked us to to go downstairs and we'd get to see lesbian action for $50 each from us. I looked at him and he nodded so I went along and went down stairs. After coming up, he said he didn't get his money's worth and that I should pay him back the $50. I told him that he nodded and then he insisted on that I left him no choice because I said yes first and when the strippers looked at him he had no choice and thought he would just collect from me later.
On the way home, I snapped at him and told him that's it. I thought he was joking at first but then he started saying shit like just drive me home and I don't want to be your friend. I knew then he was serious. He tried earlier that night to stop talking to me but I guess he thought he could kick another $50 out of me tonight before he said it. I paid also for our drinks/entrance at the strip club, and those of you who go, know its very expensive. Cost me around $40 all together.
I was so pissed at him tonight, that I actually pulled the car over and almost got out of the car to beat him and leave him rotting on the street but I didn't do it because I know his parents and they beyond nice to me. They treat me like their son. I see no resemblance between him and his family.
On the way home I just bitched at him for all the years he's maybe pay for everything. I even stopped at one light and noticed 2 guys driving next to us just to ask them what they thought of the situation and they even agreed with me that my "best friend" was using me just for the money. This was embarassing but I just wanted to prove a point to him to show him what people would say if they knew how he treated me and what strangers alone would say. That way if someone we knew and told them, god knows what they would say about him.
I told him if he ever called me one more time, I was not going to be held responsible for what I would do and I would drive to his house and beat him and didn't care if the cops were there.