The Dos and Don'ts of Fan Fiction Sex

The most important rule of writing your hot crossover fanfic is that no adjectives should be spared. Heap them on, dip into the well of unusual adjectives, extend your feelers out into verbs and nouns that make the loins of perverts around the world churn with delight. 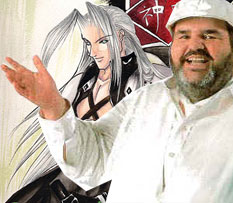 Sephiroth watched as Paul took off his chef's apron, revealing his naked and fat body. Sephiroth approached him and their lips and tongues intertwined. He could taste the lamb tartar on Paul's kiss and his passion demanded that he quench his thirst for more of Paul's delights. He kissed his way down Paul's chest to the morsel waiting for him below the chef's stomach.

Evocative to an extent, but with Paul Prudhomme and Sephiroth getting busy you should practically smell the sweat pouring from their bodies. Also, describing Paul's naked "fat body" does a great disservice to the ample Cajun chef. Let's take a look at how this piece could take a turn for the better.

Sephiroth's body quaked with anticipation as Paul's thick fingers fumbled with the strings holding his apron in place. Sephiroth wanted to cry out, to rush forward and assist him, but he contented himself with gently massaging the cucumber into his most precious of passages granted to him by Genova. At last the apron was discarded and Paul stood before him, hirsute and swollen, with a sheen of sweat glistening on his gelatinous thighs. The cucumber forgotten, Sephiroth rushed forward and embraced Paul, feeling his warmth against his own bare chest. Paul groaned contentedly as Sephiroth's tongue worked into his mouth, dancing playfully and passionately. 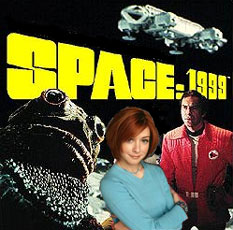 Willow licked her red lips wantonly, watching through the hole she had drilled in the shower chamber as Commander Koenig stepped inside wearing only a towel. He discarded the soft terrycloth and stood naked in the drifting steam and Willow gasped softly, her hand slowly working its way down the front of her swampy panties. She was stewing in her own juices like a package of kettle corn and her body hungered for the throbbing embrace of his meaty mass. Commander Koenig's nipples were as hard as granite and erect like tiny Eiffel Towers of passion, engorged with a blood that flowed through his veins like 40 weight sex lubricant. She stared transfixed by their shape, as round as a cylinder and even more charged with the electricity of his hotness.