Thursday, Jan 11, 2007 by Steve "Malak" Sumner
Hey guys, I just found out that I was allowed to write Guides. I'm not any kind of expert on much of anything except for three things: bagged and cut vegetables, karate and Dungeons & Dragons. Maybe Star Wars too, but that's one of those fields like politics where there are probably way too many experts for everybody's good. Anyway, it's hard to write a guide about karate for the Internet and probably no one cares about bagged and cut vegetables, so I decided to make this guide about Dungeons & Dragons.
I hear all the time people complaining about how hard it is to make a sweet D&D character, so that's what this guide is. It's a guide to making a really sweet D&D character.

STARTING OUT ROLLING YOUR STATS 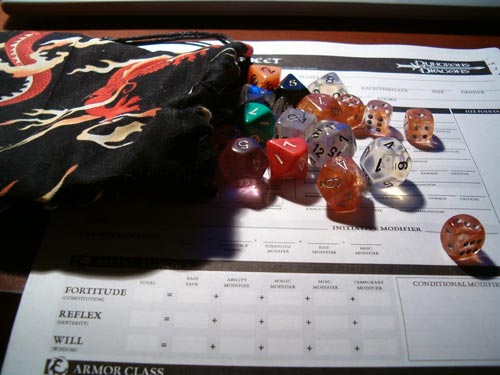 The first thing everybody has to do when they make a character is roll the dice! Some DMs (that's short for "Dungeon Masters") might let you go by a points system or something, but I think that is pretty lame because where is the fun in that? It's like we're robots calculating numbers for spaceship trajectories or something. Beep, boop, beep my dexterity is 16! No thanks!

So you need four six-sided dice, which I'll be calling a "d6" from here on out. If there's a number in front of that then it means how many dice we're talking about. So in this case it's 4d6.

Okay, you're ready to roll, but wait! Before you start rolling you need to think about what kind of character you're going to make. A wizard? No. A cleric? No. A thief? No. You're making a fighter or a barbarian, those other classes are for other people who will be your sidekicks. Like when Jamie used to run Dragonlance for us Keith and Marty were my sidekicks and they were a thief and a cleric. Doug was a wizard but he was dating Kathy at the time so he only was there like twice and then Keith played his character (and got it killed in a spike trap).

So we're making a warrior type of dude. That means we want our best rolls on his physical attributes. Roll 4d6 for each attribute and discard the lowest die roll. Keep the other three and write down all six scores. Then you assign the scores to the attributes as you want to do it. In this guide for the character I'm working on I rolled 18, 14, 14, 15, 18 and 16. Your numbers probably won't be that high, especially if your DM is watching. Heh.

Okay, since we're making a warrior type I went ahead and assigned the attributes as you see here:

As you can see he is very strong and very constitutional. He has a high wisdom because "a warrior should be almost as wise as he is strong". That's a little bit of Sun Tzu for you. I think he was one of the Zhentarim.

This character also has a good intelligence and his dexterity and charisma aren't too shabby either. He is a well-rounded character.