Oh, yeah, right, the store. So we roll in there to pick up the essenchials like beers and jerky and power bars and mountain dews. Roll the cart up to the checkout and I was in for a root awakening. I'm talking up the little fox in the Kroger vest when I fucking see this shit next to Alaska magazine: 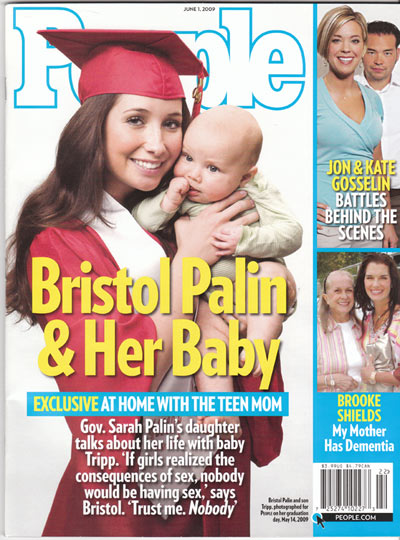 That's right. Bristol is still on her fucking PR tour even though Tank my dude said we were in truce mode with palins. So I bust that shit out of there immediately and let me tell you what a load of shit is in there. First off, this cover is ridiculous. Bristol in her cap and gown what the fuck? I thought maybe the view gave that bitch an honorary degree.

Turns out she's got all high and mighty and decided to graduate high school or some shit. Whatever. I can deal with that when I feel like it. Big deal. Anybody who is white or asian can graduate high school. How many people can take down a grizzly with an SKS at 200 yards? 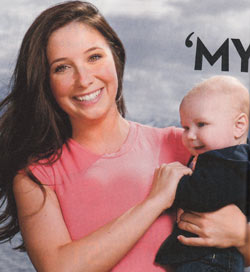 I swear to shit I saw this same picture only it was ann coulter holdin an alligator.And Jon and Kate what the fuck is that bitch's problem? Has she not looked at her gay ass husband lately? Dude looks like Rupert from the deli on the tonight show and hes the one cheating? Girl looking like that robot star wars bitch with the titties goddamn kate have some self respect. No matter how tore up your pussy is from all those babies you still have got other things you can offer. Get some dvds. Be like Bristol and graduate some shit with some advanced degrees. Lose that little gilbert godfree looking motherfucker.

Back to Bristol though. This is just the kind of bullshit mrs. Palin is playing now. Tank said shes desperate to repair her image on account of she got those 50,000 dollar shirts or whatever and was acting like a retard with Katie couric.

Now shes all super mom and Bristol is number one teaching abstinence or whatever other bullshit that's a ridiculous lie and never works. Yeah let's put some ice cream in front of a ten year old with a spoon and tell him he can fucking eat the ice cream when he marries it in eight years.

Sorry to be graphical there but some things leave marks that no amount of magic eraser is going to get out of a fabric seat cover you hear me Janessa? Take an immodium or something goddamn girl.