Things I Can't Do With My Son No More 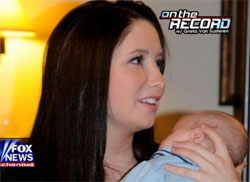 Even though shawn hammidy used to be like my number one nigger now they won't let me talk and they are always letting bristol talk which is BSTripp Easton Mitchell Johnston you are just a baby, a wonderful baby, like a precious clay ball that needs to be squeezed into a dude. I have given life to you from my loins and also from Bristol Palin's loins with the little landing strip above it. You came out of her loins and not my p-due.

Now, tragically, I am no longer allowed to shape you into the dude you should be. Others have intereventioned in an act that is tandamound to kidnapping. These others are the Palins, namely Sarah aka Mrs. Palin and her husband Todd and also bristol. But I can't blame bristol because my theory is she has been brainwashed to hate me.

You may hear a lot of stories about me. Stories about how I am a hockey ace, how I once shot two antelopes with one shotgun bullet, how I bag hot chicks non stop, and how I am the best jeep driver in northern wasilla. All of these things and more are true. But yet I am kept back from you, Tripp. Why has fate rot such a indignity?

A father means to be a dad. I wanted to be your dad but I was denied. So I will tell you, Tripp, of all the things I would do with you by my side. 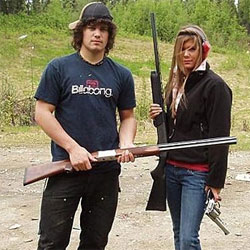 Me and mercede. Ha ha, this picture always makes me laugh cause I'm wearing my bong shirt.4x4s to the lake

Tripp I would put you next to me on my 4x4 seat and we would drive to the lake because I love the fuck out of natural shit. I'd bring some pringles and ham slices and we can play cds you like in my stereo. We can throw shit in the lake. There's this cliff part where you can get up pretty high and there's all these rocks up there, really big ones, and we can chuck those in there. Then when it starts to get dark I'll have some beers (I'll give you some pops, you're still too little for beers) and then we'll light off some fireworks. Still got some blackcats left over from last summer and about 30 m80s. If you put those in an empty beer bottle and toss em in the lake it's like a depp charge.

One day I'll be like "tripp go wash my 4x4" and you'll get all mad and get the bucket and sponges and start crawling out into sherry's front yard where I park and then I'll bust out and be "psyche, nigger, put on your flipflops I know a place" and I will take you to Titty Crab where you get crab legs and watch in a window while the titty girls wash your car. 8 legs and a wash for 9.99 and I'll get you a side car with some french fries or something. I'd give you some crab legs but I can down 8 easy.

Gonna score some weed from bodie and I will teach you how to roll up and smoke out like a main street wasilla nigger. Teach you how to make a pipe out of an apple or show you bodie's blacklight shit he got in his mom's basement. You think you're ready for foosball? Shit if you are too little for that shit I will set you up to keep score and, oh shit, I know you're too little to toke up yourself, but me and Bodie figured out with his cat that if you cut a hole in the corner of a plastic bag and then you put it on the cat's head you can blow smoke up in there and get it high as fuck. So we can try that shit on you see how you can hotbox. 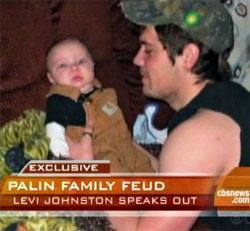 God damn look at that murder face. You are going to bust some heads and put the hurt on your share of pussies when you get older.Dog fights

Hanzo knows where the W-town Rollers fight dogs. Nobody breeds pitbulls or nothing in wasilla so it's mostly like beagles and golden retreaters and shit like that. They don't really fight most of the time but if you get one of them chewy rope toys and put that in there shit will go down. That's why I am gonna train you up like pokie gym so you can beat the fuck out of those dogs. I'll do some pavlovian shit like ring a bell and then show you a picture of a dog in a diaper. Shit to just get you pissed off like a dog is gonna be a baby. I'll put a dog in your crib and be like "see, he wants your shit" and then ring a bell when you get mad and bite him. I trained up Tapas pretty good already he can beat everyone but like the top level dogs.

So since you aren't retarded or nothing you should be even higher on the food chain. That's what it is, right? Like frogs, then cats, then moose, then dogs, then retards, then sharks, then eagles, and then regular people. Then like ghosts and then jesus and then god. It's the food pyramid.

I will date some tore up bitches just to demonstrate how shit goes. You'll be my little wingman. We'll go to El Burrito with Dawna Jefferston on 99 cent margarita night. Get some steak tacos. You can have some refried beans and a blended margarita with like half alcohol or whatever the percentage would be for a baby to get you buzzed but not fuck you up too bad so you're blacking out and puking. Then we'll go dancing at Bootytown up in Peaks. Let you see some asses clap. Ha ha yeah you will love that shit. Nasty girls there.

Then we will smoke up with the windows up in my 4x4, go to the lake, and you can watch me get worked by Dawna. God damn only girl I bet can wear me out in the entire freshman class. She's a pro. Like, you know, really skilled, not that you gotta pay. Just buy her a couple chimichongos and some gold label and she'll let you pack it in.

Anyway, dude, life is gonna give you some lemons, especially with that rotorooter todd hanging around talking about snow machines all the time. Just remember me and think of lemonade. I'll be out there getting fucked up and waiting to hang whenever lawyers or what have you can sort this shit out.

Ah fuck this shit is getting me depressed. Fuck this.