Ahem. As I was saying, Louis goes on to explain that he caught Maria going down on some random guy. Of course, since this is a Vince Bowman film, he takes over three minutes to tell this tragic tale. You see, the Bowmaster has an unmistakable formula that he draws upon whenever he needs a character to tell a story. The key is to describe every action, no matter how inconsequential or assumed, in excruciating detail. For instance:

The Bowmanized version of you might say: "I got into my car and I sat in the seat. I closed the car door. I took my keys out of my pants pocket and put the ignition key in the ignition, and then I turned it. I put the car in drive, and then I started to go. I put my foot on the gas pedal. The car wasn't going fast enough, so I pushed my foot down more on the gas pedal. The car went faster. I saw a cat on the side of the road, and I wondered if it was going to try to cross the road. The cat tried to cross the road. The car rocked as the front tires went over the cat. Then the back tires went over the cat and the car rocked again."

So you can imagine how Louis's story about catching his girlfriend going down on some guy, told through more tears than any man should shed, could drag on for a while. And, of course, Louis is not just telling the story of how he caught Maria cheating on him. He's also telling the story of his reaction to this discovery, including such details as:

Louis: "I felt like I was high on some cheap liquor, like Mad Dog 20/20 or something. But I didn't have anything." 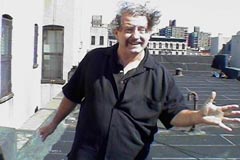 Uh oh, studmuffin alert!Absolutely stirring. Worn out by the effort of telling his story, or perhaps knocked off kilter by the winds constantly buffeting the microphone, Louis starts to pitch forward off the edge of the roof. Henry lunges for him and snags him back at the last second. Louis is not particularly thankful for the rescue. His pain, he says, is too great to bear. Mr. Henry is not without some pain of his own, however, and he shares it in the hopes that it might convince Louis to keep living.

The first shocking revelation in Mr. Henry's story is that his name isn't really Mr. Henry. He never says what his name really is, or why he changed it, so that's a totally pointless detail, but trust me when I say that Louis seems appropriately shocked. Henry goes on to say that he once had a wife, a daughter, and a highly successful dry cleaning business. Given the Bowman dialogue formula from above, you can just imagine how long this takes. It doesn't help that the Bowmatron only really has two shots - a medium shot of from the front of the two men, and a medium shot from behind the two men. Not exactly the most thrilling cinematography. Plus, given the windy conditions and the fact that the only microphone in use is the one built into the crappy camera, there are some sound issues. To that end, whenever the shot switches to behind the two men, the sound also switches to a recording of Mr. Henry reading from a script. Amazingly, he actually does significantly worse with his lines when the script is right in front of him. Figure that one out.

Henry goes on to say that as his business grew more successful, he started to enjoy his money more and more through the purchase, and subsequent imbibing, of large amount of gin down at the local pub. Every Friday night he'd hang out with his buddies, have a good time, get good and sloshed, and then amble on home. His story almost borders on entertaining. On and on he goes.

Mr. Henry: "I'd sneak in my own house like a prowler, trying not to make too much noise."

Oh man, we've all been there. Don't want to wake up the wife, am I right?

Mr. Henry: "I'd strip when I got to my bedroom and slide into bed."

Okay, that's a little more than I'd normally share with someone else, but he's trying to take the kid's mind off his troubles, so whatever.

Mr. Henry: "My wife's back would usually be turned to me."

Mr. Henry: "Then I'd raise her leg up, and slide her panties to the side. And I would make love to her."

I mean, Jesus Palpatine Christ, is that really necessary? Can you imagine your neighbor trying to make you feel better by describing how he used to sneak home reeking of gin, being extra quiet so he wouldn't wake his wife, so he could have sex with her without waking her up? If so, you should probably consider moving to someplace less horrifying. Thank God he doesn't go on to describe his Saturday morning ritual of explaining to his wife why she has a lopsided wedgie and her cooter smells like a British person's vomit. But Mr. Henry's tale of pain is not over. Please read the following aloud:

Mr. Henry: "So, on one particular Friday, everything happened as it had normally did. I left the business and met with my drinking buddies at the pub. We got drunk, got loud, and had fun. Afterwards we went home. I slid in bed and started making love to my wife like I'd always done. But in the midst of the lovemaking, my wife walks into our bedroom and screams out my name. She damn near gave me a heart attack. The drunkenness leaped right out of me. That's when I reached over to find out who I had been making love to. I pulled her by the shoulder. She didn't want to show herself, but I pulled even harder. And when she rolled over towards me, she had her hands over her face, crying. But I knew who it was. I saw right through her hands. She didn't have to take her hands away for me to know that I'd been making love to my daughter.