Sweet merciful fuck. Once again, Vince Bowman's insistence on stating things in explicit, moronic detail makes things even worse than they already are. He could have just said, "One night, I got so drunk that I accidentally raped my daughter instead of my wife." But no, he has to go on and on about making her show her face. Fantastic. 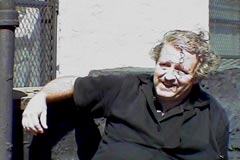 Not so pretty now, is he?Imagine yourself in Louis's shoes. You've just discovered that the love of your life is a cheating whore. You're thrown into a suicidal depression, only to be pulled out of your deadly tailspin at the last moment by the kindly neighbor who has been there for you time and time again as you've grown up. You can't even count the times that you've talked through your problems with good old Mr. Henry. Heck, you might even be feeling a little silly for not going to him in the first place when you found out about Maria. You can chalk that one up to feeling like you were high on some cheap liquor, like Mad Dog 20/20. And then, as you sit on the roof, alone and isolated with Mr. Henry, he reveals that not only have you been calling him by a fake name all these years, but he only lives alone because his wife and daughter left him after he raped his own kid, drunkenly thinking he was just going through his usual Friday night routine of silently fucking his wife while she's too asleep to realize what's going on. I think you'll agree that Louis's reaction is justified:

Yeah, you got that right, Louis. It is pretty messed up. I sure am glad we see eye to eye on this. Wait, what's that you said?

Louis: "But you can't blame yourself. You were drunk!"

He can't blame himself? He can't blame himself for violating his sleeping daughter when he thought he was just innocently violating his sleeping wife? Who the hell can he blame, then, the hardworking people at Gordon's Gin for making an alcoholic beverage? His wife for not having the foresight to fall asleep in their daughter's bedroom that night? Oh wait& oh no& he wouldn't&

Mr. Henry: "The thing is not that I did what I did, but why didn't my daughter stop me?"

That's great. That's really wonderful. That's a golden field of happy sunshine. The thing that's been haunting him all these years is not that he raped his daughter, but that when she was roused from sleep by the weight of a large, drunk man suddenly crushing down on top of her, coupled with the shock of suddenly having an uninvited penis inside her, she didn't force him to stop. That's what keeps him up at night - the thought that maybe his darling little girl secretly enjoyed the feel of her father's dick. Yippee.

Well, at least Louis is cheered up by the realization that his problems are nothing compared to the unholy clusterfuck that is his neighbor's life. The two men go downstairs to Henry's apartment for a drink. That's a little too trusting on Louis's part, if you ask me, but whatever, it's his decision. As soon as they get to the apartment, however, Henry realizes that he forgot to fix the satellite dish, the whole reason he went up to the roof in the first place. He asks Louis to take a look at his TV set, then quietly slips back out the door. Suddenly, Louis realizes what's going on. He races to the roof, spots Henry walking toward the edge, and makes a mad leap, landing on his stomach and grabbing Henry by the ankles. It's all terribly dramatic (particularly thanks to the same music that played when Henry first went up to fix the satellite dish), or at least it would be, if Louis hadn't stopped him in the middle of the roof. Right smack dab in the middle. The edge isn't even visible in the shot. Somehow, I just don't find it that exhilarating to see a weepy, denim-clad dude lamely hugging the ankles of some fat guy with no actual danger in sight. Maybe it's just me. 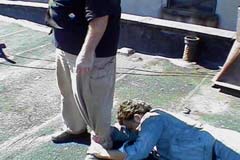 "Wait, don't go! You have to teach me how to have sex with people without waking them!"Henry tells Louis that discussing his past has made it too hard to live. Louis staunchly refuses to let him jump. Henry tells him again that he can't go on. Louis lets him go. You suck, Louis. I mean, really, the guy pulled you back from the brink of death, confessed his darkest secret, and convinced you that life is worth living, and you're going to let him kill himself just because he asked twice? That's not particularly rousing. Even worse, Louis doesn't even bother to get up once he lets go. He just lays there on the roof, waiting for the thud that will signal the end of Henry's life - a thud, I might add, that comes way too soon. Even if Henry broke into a run the second he got off camera, there's no way that thud should have come that quickly. He didn't even have time to make it to the edge, let alone fall far enough for a lethal impact. Maybe the thud was just Henry running into the mysterious satellite dish. I suppose we'll never know.

Naturally, the film closes with Louis giving a touching voiceover tribute to Mr. Henry while standing outside of a graveyard, holding a lone flower for his fallen hero. Yes, here's to you, you drunken rapist. Truly, you were the greatest of us all.

You have to hand it to the Bowmanator. Only someone of his cinematic genius could take a film about suicide and redemption and turn it into a glorious apology for incest and rape while simultaneously placing the blame for such acts on the victim. That's quite a feat. It's also horrible. In some ways, I'm actually glad that Vince was stuck with wooden actors and crappy equipment. If this movie starred actual competent performers, it would probably give me nightmares. I can just imagine Kevin Spacey looking peaceful, almost zen-like as he describes raising his wife's leg up and sliding her panties to the side. Gah.

Then again, I wonder just how much of the actors' awkward delivery was their own fault, and how much of it was Vince Bowman's direction. After all, he's the filmmaker, here. It's not too hard to picture him up on that rooftop, shouting out instructions:

Vince Bowman: "Okay, it's pretty windy up here, so I need you to enunciate."
Actors: "You got it, Vince."

Oh wait, this is Bowman we're talking about. It would probably be more along the lines of:

The scores below reflect only The Other Side of Pain, not the whole trilogy. See you next time, when we take a look at the final chapter of Vince Bowman's trilogy, aptly titled The Last Pocket.