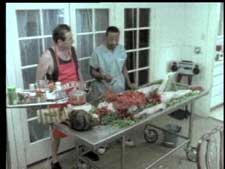 Man, it's a good thing they're singing opera. Otherwise, this scene just wouldn't be classy.

That night, Leroy is outside his suburban home watering his lawn. Peter pulls up and the two of them go inside, where a nude female body is waiting on a table. The two of them carve up the body while lip syncing to "La Donna e Mobile." Well, Leroy lip syncs. Peter just opens and closes his mouth rhythmically, but at least he's trying. Meanwhile, Brenda and Gary enjoy a nice dinner out. Brenda violates the concept of doctor-patient confidentiality over and over again, telling Gary all about her patients. After dinner, the two lovebirds go back to Brenda's place and - OH SWEET CHRIST, SOMEONE TELL THEM TO PUT THEIR CLOTHES BACK ON! God, that image is going to stick with me for years to come. At least Brenda cuts the awful, awful intercourse short by asking Gary what he knows about cannibalism mid-coitus. Strange, the threat of botulism usually gets my motor running hotter than ever. Oh well, different strokes for different folks. Brenda confesses that she has a patient who has dreams about eating people. Gary promises that he'll show her his research on the subject, and - FOR THE LOVE OF ALL THAT IS HOLY, THEY GO BACK TO HAVING SEX! MY CORNEAS ARE ON FIRE! 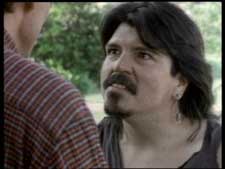 Debating skills and good looks - this guy's got it all!

The next day, Brenda takes a trip to the Princeton campus. For the occasion, she wears a top that would only look good on a woman with a Barbie doll figure who lived in 1985. She finds Gary engaged in a heated, if moronic argument with a tattooed Satanist. I swear to God, this is an actual excerpt from the argument.

Woo! Feel the excitement! Hey, I said "the excitement." Get your hand out of there. The Satanist leaves in an evil huff, so Gary escorts Brenda into his office. There, he insults her for not knowing about the connection between cannibalism and Satanism. Yeah, Jesus Christ, Brenda. Get your shit together. Gary tells her all he knows about tribal cannibals in the jungles of South America, most of which comes from the World Book encyclopedia entry for "cannibalism." Brenda asks if cannibals often use the ritualistic slaughter of their victims as a form of sexual release and Gary chews her head off for it. Well, not literally. Hee hee! I made a cannibal joke! Oh God, this movie is sapping my will to be funny. When he finally calms down, Gary gives Brenda a file containing case information on murders across the country that he's helping the police investigate. At least, that's what he says it is. When Brenda reads from it, which she does at length, it's nothing but information about cannibals, most of which we just heard.

We fade to Brenda at home, reading the file on her bed. It gets her all hot and bothered, proving that she is without a doubt the most sexually disturbed individual in the world, and she strips. Let me point out that it has been all of two scenes since the last time she showed off her naked body. There should be some sort of rule that unless it's actually a porno, Sharon Mitchell is not allowed to be naked for any more than ten percent of a movie. She is not a good-looking woman. She rubs herself as she continues to read. At last, she finds a passage that says that some cannibals did kill as a form of sexual release, which makes her the happiest girl in school. In your face, Gary, you lying sack of crap! 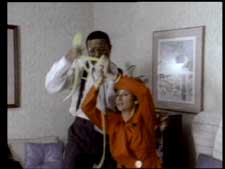 I shouldn't be seeing this.

Misty gives Leroy a call. He picks up the phone that he keeps beside his hot tub. Now that's luxury! Misty tells him that Tawny is missing and asks if he knows anything. He hastily denies all knowledge. Her concern for her friend's wellbeing slaked, Misty immediately asks if she can have a part in one of Leroy's movies. Leroy, who is upset to find out that Misty and Tawny are friends, agrees. In the meantime, Peter has another therapy session with Brenda. She asks him to tie her up like he does to his victims in his dreams. Bear in mind that Peter has never admitted to actually being a cannibal. After a good deal of convincing, he finally agrees. That's not enough for Brenda, though. She bends over the couch and orders Peter to whip her with the rope. She writhes and moans as he beats the bejesus out of her. Somehow, I get the feeling that the therapy has really become more about her than about the paying client. Whatever. Peter doesn't care. What puzzles me, though, is that in Peter's description of his dream, as well as the carving and eating of the body with Leroy, there is no mention of a rope or tying anyone up. In fact, in the dream the girl's hands are clearly free the entire time. Way to go, movie!

At the police station, Gary tries to explain to the cops in a simple words as possible that he can't determine anything from the worthless evidence they gave him to work with. Unfortunately for him, as well as for the audience who has to sit through this torture, the cops are complete idiots. The female cop especially has a lot of trouble wrapping her mind around the concept of an anthropologist not being able to do the police's work for them. Gary explains that the few bones that are left at the three year old crime scene are too damaged to give any sort of information other than that the victim was probably young. The cops bitch and moan a little more, then all of a sudden Gary has all sorts of information including how the victim was killed, what weapons were used, how many people were involved in the murder, and that each bone was broken with a different blunt object. Personally, I can't figure out how anyone could tell from a couple old bones that every fracture was from a different instrument unless we're talking about hitting someone once with a aluminum bat and then again with a baby grand piano. I mean, I'm no forensics expert, but then, neither is Gary. He's an anthropologist. Which brings up another point. Why the hell is he even being consulted on this case? Goddamn, the more I think about this movie, the less sense it makes. 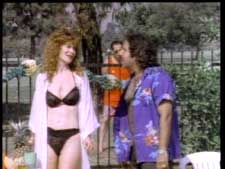 Without Ron Jeremy, this movie wouldn't be any good at all. Wait...

We cut to a pool party, presumably in Leroy's back yard. Two women waste a good five minutes of our time talking about how many face lifts a nameless woman who never appears on camera has had. That's good, worthwhile dialogue, there, James Holiday and Charles Rojas. Thanks a lot. Just then, who should happen to come along than none other than Ron Jeremy! The Ronster, who has probably seen Sharon Mitchell naked more than any other person on the set, plays the part of a wannabe filmmaker who tries to con the two women into appearing in his new movie. His role is a complete waste of time and doesn't contribute to the plot in any way, shape or form, but hey, it's Ron Jeremy. The man has more back hair than an orangutan and he's still managed to sleep with more women than you've even met. Peter, the only person in the world who would come to a pool party in a suit and tie, and Leroy step aside from the crowd. Leroy tells Peter that he is targeting a new girl for dinner and that it will be up to Peter to kill her on the movie set in a few days.

On the set, Leroy tells Misty to drive down a dusty mountain path until the special effects guys make one of her tires blow out, then to get out of the car and wait for him. She gets in the car and starts to drive, but the special effects are provided from none other than Peter. Armed with a rifle that has no scope, Peter manages to shoot out the tire of a speeding car in a dust cloud from what looks like more than two hundred yards with just a single shot. Not bad aim for an illiterate entertainment lawyer. Misty gets out of the car unharmed - PSYCHE! She totally gets shot! Well, there is a gunshot sound and she falls to the ground. There is no blood and she doesn't try to grab any body part, even though she's still alive, but I think she gets shot.

Peter and Leroy arrive at the scene. Peter immediately becomes upset because he doesn't like shooting people he knows. Killing and eating strangers, that's okay, but not his murder-buddy's annoying secretary whom he hates! Anyone but that! Peter refuses to finish her off. He and Leroy struggle for control of the gun, but in their fight, it goes off and kills Misty. Well, there is a gunshot sound while the gun is pointed vaguely in the direction of the ground, but I think it kills Misty. For some unknown reason, the film stock changes to a poorer quality at that moment and remains like that for the rest of the movie. It's as if Mike Tristano is crying out to us, "Look out! It's way downhill from here!"