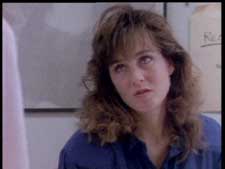 I pity the fool who messes with Mr. P's secretary!

Brenda shows up at Peter's law firm. There is an unnecessarily long scene between her and Peter's secretary over whether or not she can go in without an appointment. Brenda refuses to explain why she's there, so the secretary is just doing her job, but somehow she comes out looking like the bitch. Peter greets her and takes her into his office. There, Brenda tells him that Gary wants to take him to the police and if they don't cooperate, he'll get a court order to go through her files. Peter tells her to destroy his file or change the name on it. Brenda refuses, saying it would ruin her reputation. I sort of think that betraying a client's confidentiality to a nosy, police-affiliated anthropologist would ruin her reputation, not seamlessly covering it up, but I guess I just don't know psychiatry. Either that or James Holiday and Charles Rojas are morons. Brenda concocts a plan - she'll bring Gary back to her house and have sex with him. No wait, there's more! Afterwards, if she comes out of the bedroom first, then everything is alright. If Gary comes out first, Peter should kill him. You know, when I was in therapy I didn't get to kill anyone. Come to think of it, that was sort of the point of the therapy. Talk about your irony! While you're at it, talk about how much this movie sucks. 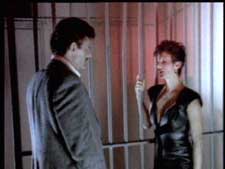 Oh crap, the Brenda's out of its cage again.

Gary and Brenda go out to dinner once again. She asks him if he thinks thoughts are "bad." There's no real explanation behind it. Just "bad." I know the award ceremony isn't for another year, but I'd like to nominate this for the absolute dumbest conversation between two characters that are supposed to be intellectuals. From that conversational springboard, by which I mean there is no possible direction for the dialogue to go but up, Brenda leads into a discussion about their relationship. Somehow, possibly through witchcraft, Brenda manages to use that as a pretext for dragging Gary away from the restaurant to the world's dingiest S&M club. They spend all of twenty seconds there, so I hope the cover charge isn't too bad.

They go back to Brenda's house, where they are immediately naked (shudder) and Brenda is suddenly insane. Insanity, in this case, is brought to life before the camera through the time-honored acting technique known as "really bad acting." Brenda has enough trouble delivering her lines already. I can't fathom why Mike Tristano would allow her to make her performance any worse. Then again, I also can't figure out why he's make "Feast" in the first place. Brenda's sudden insanity is apparently brought on by the fact that she can't feel pain due to some botched hypnosis. Actually, she wavers on the issue. Sometimes she says she can't feel pain, other times she says she can't feel anything. All I know is she was having a great time being whipped and having sex earlier in the movie. To illustrate her point, she sticks a knitting needle through her hand. As it goes through, she moans and squirms with pleasure, so I have to assume she's feeling something. Having an extreme reaction to physical sensation is not typically considered one of the top ten ways to convince people that you have can't feel any physical sensation. Gary, who is smart enough to spot a crazy bitch when he sees one, puts his pants on and walks out. That's the cue for Peter to put an axe in Gary's chest. All in all, this is a bad date for Gary. 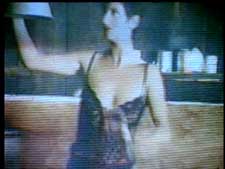 Even on video, Brenda is a frightening, frightening human being.Leroy sits in his hot tub. He opens a packaged video tape and sticks it in the TV/VCR he keeps precariously balanced by the edge of the water. That placement won't come into play later on, I just thought I'd point out how unsafe that sort of thing is so that this movie would end up having some sort of socially redeeming value. The video turns out to be Brenda in lingerie so hideous that I almost wish she was naked again. She mouths off to Leroy for a while and insists that she's smarter than him. Funny, he's the head of what is supposedly a successful film studio, and she just stuck a knitting needle through her own hand. Who seems like the smarter one to you? As a finale, Brenda shows off Gary's mutilated body and tells Leroy that, unlike him, she has the guts to kill people she knows.

The next day, Leroy follows Peter from his law firm to Brenda's office. The slow chase is underscored by some of the crappiest music the Eighties has to offer, which is doubly irritating since this movie was made in the Nineties. That night, Leroy breaks into Brenda's office and takes a look at Peter's file. He finds the tape of Peter's sessions and gives it a listen. The first half is actually played off the tape, and as such is utterly incomprehensible once it's picked up by the microphone. The second half, which contains Peter admitting that Leroy is his partner in crime, is clearly redubbed. We transition to day again, as Leroy meets up with Peter in the law firm parking lot. Leroy invites him over for a feast, including "smoked breasts." The phrase "smoked breasts" gets worked into the conversation about fifty more times, as if it was somehow clever and worth repeating (hint: it's neither).