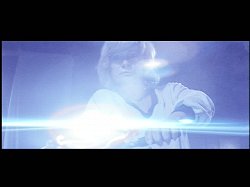 Look, it's Revenge of the SHIT! Oh man, I bet no one ever thought of that before.Determined to bring Ricky back, two of the female scientists suit up to go out after him. After splitting up, one of the women, Gail, accidentally gets her foot wedged in a small crevice and falls down. As the other scientists yell at her to come back and close the outer airlock door, Gail suddenly notices that some doohickey from her space suit has vanished. "My thermal unit's gone!" she screams. This is apparently some big disaster because the music turns very tense and one of the scientists inside the compound starts speaking to her slowly in small words. "All right, Gail," he says, "you must connect the blue and yellow leads." The socket for the doohickey on her forearm has two giant obvious blue and yellow wires hanging out, but Gail is unable to push them together, probably because she has fat fingers. As her suit temperature plummets in the freezing atmosphere, Gail works frantically to press the wires together, but is unable to. So what would a rational person do in this situation?

I shouldn't even have to answer this question because Gail does possibly the most retarded thing possible in the situation. Amazingly, it doesn't work, and all she manages to accomplish is spraying a little blood around out of a superficial wound before dying of exposure. Maybe there is a scenario where astronauts are supposed to purposely break the seal of their suit, like if they've lost their cyanide pill and just can't bear this awful existence one minute more, but Gail had to go a step further and ruin her space suit so no one else could use it, either. Have a little courtesy, for God's sake.

After Gail has freeze-dried herself, the other scientist, Kate, eventually wanders back and after gaping at the body, goes to shut the airlock door like the scientists have been screaming about through the intercom for the past ten minutes. Kate slowly steps inside and begins closing the door, and just before it's shut, Ricky bursts through and confronts her! What will happen? Is Kate doomed? How will she survive? Well, she can just shoot him with the ASSAULT RIFLE she happens to have in her standard loadout, and so she does. I don't know why a scientist would need a gun while examining ancient rocks on a lifeless alien world, but for once it comes in handy, so it's all good. 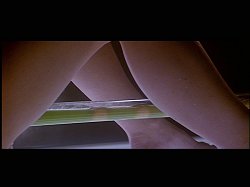 glug glug glugAfter Kate comes back inside and cries over her harrowing experience, two other scientists, Mitch and Sandy, get suited up and venture back outside again to putter around with rocks or crystals or whatever. After they poke at piles of debris for a while and it looks like nothing is going to happen, suddenly a big rubber suit flashes by the camera! The Inseminoid is attacking! At least I assume it's the Inseminoid, because it's the only big alien monster in the whole movie. Mitch is quickly torn apart, as signified by blood-smeared articles of clothing being flung every which way, and the other one, Sandy, has her breathing tube pulled out and promptly falls unconscious.

When she wakes up, she's lying naked on a big white table, and there's some candles and Barry White music and scented oils and... well, maybe not, but the Inseminoid has decided to get down to business. The giant rubbery monster appears between her legs, and before she can resist by opening her eyes as wide as humanly possible, a big long clear tube is inserted into her nether regions and some sort of vile fluid poured in. I think viewers are supposed to think she was inseminated by a yard of beer, but I'm not sure. As the ale bathes her ovaries Sandy appears to enjoy it briefly before waking up, back in the habitat, surrounded by some of the other scientists. Was it all a dream? Probably not, since one of the scientists announces that she's "two months pregnant." Good, at least it will be one of those alien fetuses that gestates within a few hours, keeping the movie mercifully short. Everyone assumes the baby is Mark's, however, as it must have resulted from one of their sessions of stolidly pressing up against one another, since I suppose that in the future getting pregnant is sort of like wearing a nicotine patch.

After everyone mopes around for a while, Sandy wanders into the ladies' bathroom, where another scientist is drying her hair and babbling about getting to go home. As Sandy stares into space, suddenly the camera cuts to the magic crystal glowing again, and the bathroom mirror suddenly shatters as Sandy grabs the other scientist and strangles her before grabbing a pair of scissors and mixing it up with some stabs. As Sandy stares forlornly at the bloody corpse, another woman walks in, and is soon chased around the habitat before being killed too. In fact, Sandy ends up killing pretty much everyone else in the station, who are apparently too stupid to figure out how to defend themselves from a 40-year-old pregnant woman. The kills include: 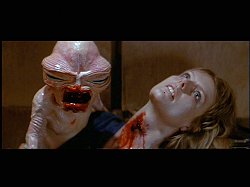 The baby Inseminoid bonds to its foster mother.In the midst of killing everyone, Sandy retreats to a cavern and gives birth to her bastard offspring, which involves a lot of screaming and opening her eyes so wide they threaten to fall out of her head. After about five minutes of shrieking and contorting, finally some sort of demon baby slides out of her murderous vagina, and then another one, because she's had twins! Remember how the ancient alien civilization worshipped twins? Yeah, me neither, but here's where it ties back in, I guess. Instead of caring for her newborn children, Sandy instead gets up and runs off to kill what remaining people she missed the first time around. The remaining scientists stumble across the babies, and upon viewing their inhuman faces and otherworldly groans and screeches, bundle them up and take them off to care for them, possibly to put them up for adoption later on.

In the end, Sandy's lover Mark finally manages to kill her by engaging her in a push-fight where the two knock over a stunning number of boxes before Mark finally grabs hold of some wiring and strangles her. Then as a final insult, when he returns to check up on the woman looking after the alien babies, he walks in to find one feasting on the now-dead scientist, while the other pounces from the shadows to take care of him. Then a rescue crew lands and the Inseminoid babies stow away aboard the ship, planning to feast on all of humanity or something, I didn't really care by that point.

Released in 1981, "Inseminoid" is obviously one of the many "Alien" knockoffs trying to capitalize on the success of a movie that was actually good. Needless to say, it fails on every level, although it does predict the shitty "human female birthing an alien baby" plot that helped foul up Alien 3 many years later. More disturbingly, this movie is as old as I am, and despite being absolutely awful, it probably made more money than I ever will in my entire life. That's really the depressing part.