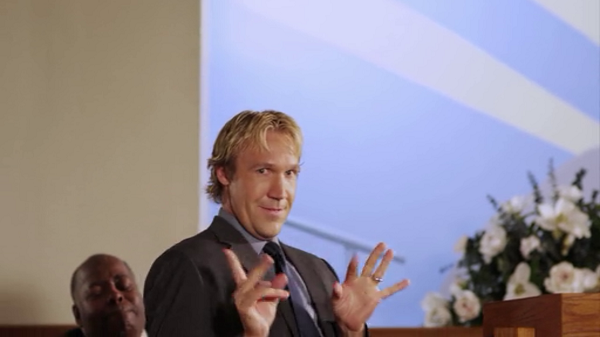 Remember Me Again? That's right, the really shitty movie we did just before this one. This is pretty much that exact same thing again, except this time the zany identity swap is white mega church pastor to poor black inner-city not-so mega church pastor, and Carl Winslow is in this one, so it's actually got someone who was sort of famous for a while like 30 years ago moving past a camera at some point. That's pretty much it though, otherwise it's practically the same goddamn movie all over again, right down to the insufferable smugness and shiteating mugging directly into the camera, and painfully stilted hijinks/totally unrelatable life lessons of one D.A.R. White & pals.

We mentioned that Brother White stars David A.R. White yet again, right? Yeah, we weren't kidding about that Rob Schneider thing. Really the main difference between this and Me Again is that instead of the kookie head-spinning slapstick nothing really happens except vaguely unsettling glibness and creepy outsider stereotyping. 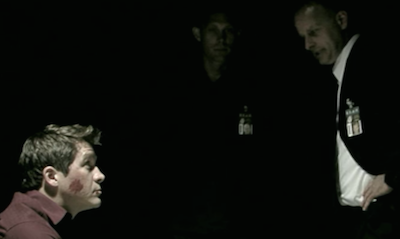 It's the year 2030, and all of paranoid Christian hardliners' wet dreams worst nightmares about religious persecution have come true: bibles have been outlawed and are openly mocked and thrown in the trash where they belong, renegade street preachers and kids with butch but conservative hairdos sneak out after curfew to smuggle around verses from Corinthians instead of skanking and having Faygo balloon fights and getting curious about each other's penises. Our only hope for salvation is a pair of terrorist lunatics martyr hero McSaviors to rescue the day by hacking into the internet and bringing down that secular commie bastard Uncle Sam once and for all.

All of the ensuing action is of course hilarious, especially the parts involving cybercrime and technology of any kind, since the people who made this movie predictably know less about what computers look like or how to use them than 12th century leech farmers. Toss in a terrible romance subplot and lots of torture scenes to inspire sympathetic gritty resolve in your fundamentalist target audience, and you have yourself what is legally considered a moving picture in many states. Let's be honest, we're probably going to need a full review to do this one justice.