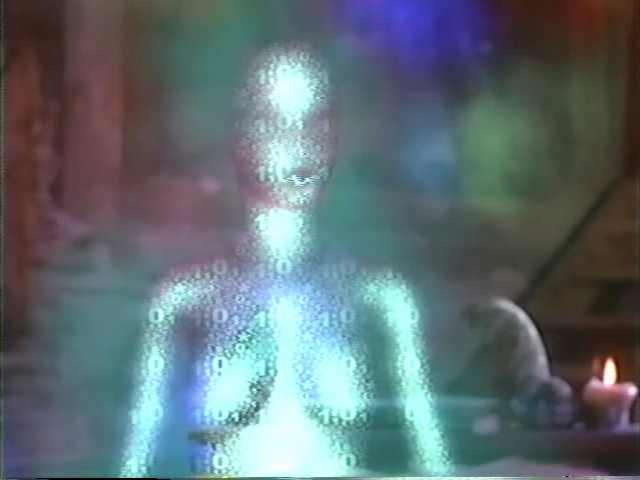 Fuck, if this is what the future has in store let's just destroy the planet now.

The binary woman informs Alex that she is "human and digital. An avatar." She then claims to be "coded with all history" and offers to show him the future, at which point a screen emerges from her chest showing a picture of a mushroom cloud. How did a computer program from the future end up in a 300-year-old meteorite, you ask? The avatar says she was "launched into deep space 200 years from now, time shifted through black holes." She then tells him all about celestial harmony and the "notes of the planets," and informs him that he is the "note for the Earth." Then she says that "the loss of Earth will come to threaten the very cosmos" and asks him if he is "going to play." You'll notice that there are no jokes in the previous paragraph, because how the fuck are we supposed to make that more ridiculous?

Somewhere in that torrent of insanity, the avatar tells Alex that Petrov is about to receive a big shipment of plutonium, and it's his job to stop him. Cut to said warehouse, where Alex has some stupid trap rigged up involving a metal barrel and a cut-rate smoke bomb. Fortunately, Petrov's soldiers are not known for their combat awareness, so they all run away in terror and Alex makes a break for it with the plutonium. Petrov almost stops him with his laser pistol, but a mystical dwarf who helped Alex sneak into the base earlier shows up at the last second and knocks Petrov out with a baseball bat. "I believe 'timber' would be the right thing to say," he quips. Then he says "let's finish him" and pulls a giant revolver out of his pants. Man, why can't this guy be the hero instead of the whiny teenager?

Alex balks at using the gun, but he seems to have gained an experience level somewhere along his journey, because now he has the power to turn the General into a cockroach, which he does. The vigilante dwarf (Dirty Sneezy?) then complains that the plutonium was stolen from his people, "who used it for peaceful ways." Alex finds this so persuasive that he hands the case of weapons-grade plutonium to the tiny gypsy. That's going to look really great during the CIA debriefing.

Oops, time for a detour! Apparently the reason that Alex's parents don't remember him is because their "spirits" were stolen by Quake Lady, and he has to rescue them now. When he agrees to the rescue, many more diminutive gypsies emerge from the shadows, join hands in a circle around him, and start chanting:

You'd think that somewhere between "teen spy movie" and "dragging ghosts out of hell" someone might question the overall direction of the film. Oh well, let's see - the plutonium is safe, sort of; the General is climbing up a kitchen wall somewhere; and Alex's parents have made a full recovery. There's only one loose end left: Quake Lady, or "the Cyber Witch" as she is officially known. She hacked into NATO's computers and is now in control of the "Finger of God" system, which is just like a regular nuclear missile silo only you can remote control it over the internet. Alex decides that he's got what it takes to regain control of the system, and without any twinge of irony or remorse, he utters the greatest line in the movie: "I need a glass harmonica, and I need privacy." This marks the only time that sentence has ever been spoken outside the context of an eccentric millionaire and several Las Vegas hookers.

Privacy and harmonica obtained, Alex summons the avatar out of the meteor. That sort of makes sense, given that the computer program from 200 years in the future can probably...wait, shit, that would be too rational. The avatar informs Alex that he himself must "become pure digital matter, " and moments later he gets sucked into the computer "Captain N"-style for the final confrontation. 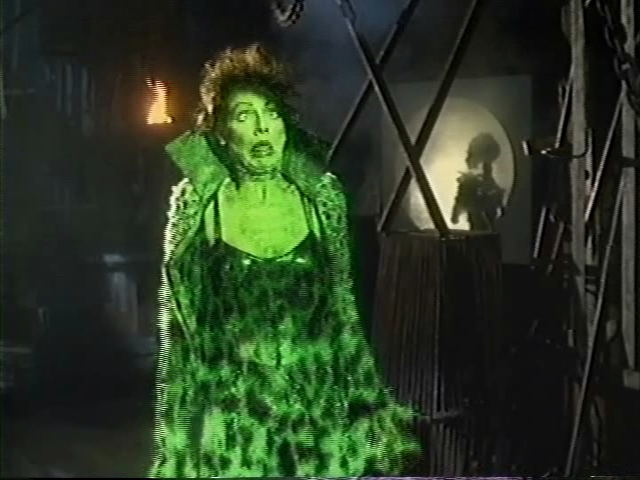 She died as she lived: covered in green light and making a stupid face.

Alex emerges in the Cyber Witch's e-cyber-techno-lair, which of course looks like a level from Quake. Specifically it looks like what your mother might think a level from Quake would look like - somebody's cluttered basement, but with more fire and dead bodies. The battle consists of the Cyber Witch teleporting around and starting fires, while Alex runs around like the idiot he is, not even bothering to look for the quad damage.

Eventually he finds something better - that goddamn glass harmonica again. Yes, the final battle in the movie is the most anti-climactic, which is really saying something considering how piss-poor all the other ones were. He plays the harmonica for a while, the Cyber Witch shoots some green crap at him that's immediately reflected back into her by the harmonica, and she dies from toxic levels of electricity special effects. Cut, print, wrap, let's get the fuck out of here. There's some epilogue with the CIA director trying to recruit him yet again and with Alex back in Iowa living happily ever after, but if you still care about that after being dragged through the minefield that is the rest of the plot, you must be some kind of superhuman juggernaut.

God, where do we even begin to sum up what we've just seen? The chanting circle of dwarves that sends the protagonist to hell? The staggering tactical incompetence of every alleged "spy"? The glass harmonica battle in cyberspace to decide the fate of the world? There are no real technical issues with this movie; it's really the script that earns it a place on this hallowed list of cinematic atrocities. Thanks to Shapeshifter, we will spend the rest of our lives with an irrational fear that suddenly all continuity will break down, and our world will become a series of ill-conceived non sequitur scenarios involving magical musical glass bowls and digital asteroids from the future.