The first thing you'll probably notice when trying to watch Things is that even for a bunch of mouth-breathing mustachioed backwoods Canadian hillbillies, every single person and/or character in Things is monumentally, debilitatingly retarded. From drooling all over themselves and stumbling all over everything in sight, to stuffing jackets in the freezer, to pouring tapwater into their own beer bottles for no apparent reason while mumbling something about water milk, to literally asking themselves the timeless question "Does a toilet flush in a blackout?" out loud, there is seemingly nothing they aren't capable of doing or saying at any moment (except for things that aren't the most idiotic things ever said/done).

There's of course no way of telling exactly where the idiot characters and the actual real life illiterate[4] morons behind them begin or end, but one thing is certain: the longer you keep watching, the more obvious it becomes just how much overlap there is between the two. We're not sure what imaginary dimension of wannabe cult stoner horror movie irony these guys envisioned themselves in while they were making Things, but for some inexplicable reason they seem determined to occasionally wink obnoxiously to their nonexistent audience out of it by name-dropping/making totally cool and smart references to random pop culture items peppered throughout the movie, like the fun meta moment where they sit down to make fun of how cheesy the movies on TV are, or how the one guy keeps mumbling about the Salvador Dali poster in his bedroom and trying to draw parallels to "sci-fi novels" undoubtedly written by people with more normal amounts of shame and/or chromosomes.

Then again, maybe we're the real assholes here for letting ourselves trail off into any half-assed pseudo-analysis beyond the level of JESUS CHRIST JUST LOOK AT THIS SHIT MAN WHAT THE FUCK WERE THEY THINKING:

This scene brings new meaning to the term "whiskey dicks".

Okay nevermind they're still the assholes. By the way, you can thank us later for sparing you from the stone silent ten-minute "two lumpy hosers try to find the bathroom with a flashlight" scene immediately following that one. Between the full-frontal flabbiness when one of them somehow manages to get his shirt off and the dialogue that would make Tommy Wiseau double over in agony, it's clear that we're dealing with an all-star cast of guys who probably take turns trying to microwave their own heads, but lose their nerve and pull out halfway through[5]. Let's go through the roster of assholes, shall we?

But the greatest asshole of all is whoever wrote the "plot" that they occasionally try to cram in to explain whatever the fuck is going on at any given time. See, near the beginning, Don and Fred open the freezer in Doug's shitty backwoods cabin and find a book full of Satanic murder drawings and a tape recorder with evil voices on it, then they talk about how this is just like "that weird movie with the weird things". So they just sort of fast-forward through a pastiche of every horror movie plot macguffin, then break the fourth wall about it like a retarded bulldozer full of retarded fourth wall-obliterating megaloser dynamite. Then they put their coats in the freezer, just because. Somehow this movie manages to be totally derivative and way too original at the same time.

The actual premise, if Things has one, has something to do with an evil fertility doctor (guess who (not Dr. Who)) impregnating Doug's bedridden wife, but neglecting to mention that the baby was a giant mutant ant and the birth would be an involuntary reverse reticulating ribcage explosive ant-mandible C-section. Unfortunately, after that dramatic entrance the ant(s)[6] seem kind of tired, and their monstrous abilities are mostly limited to standing still and occasionally wiggling in place a little bit or being thrown at someone's back by a production assistant. This leads to an action "climax" involving a chainsaw, which in addition to being the most boring use of a chainsaw in movie history, raises the important question: what kind of hardware store owner took a look at these guys and thought "Sure, I'll sell you boys a chainsaw"? On the other hand, maybe he was hoping chainsaw nature would take its course and we would have been spared the existential horror of Andrew Jordan's House of a Regular Amount of Corpses (Generally Zero), but sadly they somehow managed to avoid killing each other by sundown that day, and so here we are.

With all the shitty movies and unturned bargain bin stones out there, can we really say, definitively and with 100% certainty, that Things is the single, absolute worst movie ever made? Probably not. But we're pretty damn sure it's the worst one we've seen...yet. Now, please believe that we are sincere and heartfelt in saying we wish that we could end this review right there, but there's only one way a review of Things can end: 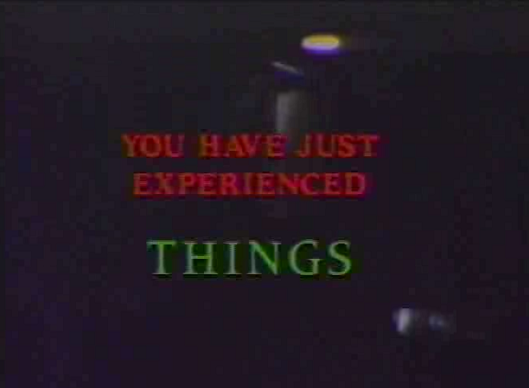 [5] We don't really have any evidence to back this theory up, but we're pretty sure the origin story of everyone in Things involves the words "failure" and "pulling out" one way or another.

[6] We're not really sure if they actually kill hundreds of ant-monsters throughout the movie, or if it's the same one popping up over and over like a mysterious odd-looking figurine.