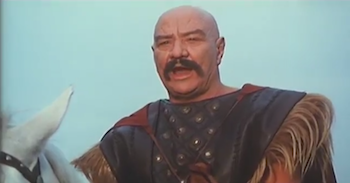 Oh, maybe we didn't mention that the evil usurper is the son of Satan's personal messenger, Belial, and is destined to plunge the world into an age of eternal darkness[3]? Don't worry though, the forces of good (we assume) are on top of things (things other than flaming thrones), so they plot to conceive a holy warrior baby right at the perfect time. Sadly, Jesus and the apostles must not have been available, so instead our hero is the son of this guy, who has the power to turn other people invisible AND invincible! ...for about an hour or so! ...and he can only do it once. Truly this is a wondrous world of magic and supernatural allegory to rival the height of Tolkien's writings.

At this point we've spent far too long worrying about the plot and not nearly enough time in the WELL OF MADNESS:

Okay, so it's not really much of a WELL OF MADNESS, more of a poorly-run underground zoo and smoke machine emporium where all of the snakes are on near-lethal doses of Ambien (and so is the orchestra.) It does sort of fit the psychological torture theme of the whole evil castle. If you thought the WELL OF MADNESS was terrifying, just wait until you see the castle's actual torture chamber, in which the real terror comes not from the giant crossbow pointed at your solar plexus but from the fact that your head is mysteriously lit totally differently from the rest of your body, and the inevitable solipsistic torture that arises from wondering how anyone manages to fuck up lighting that badly: 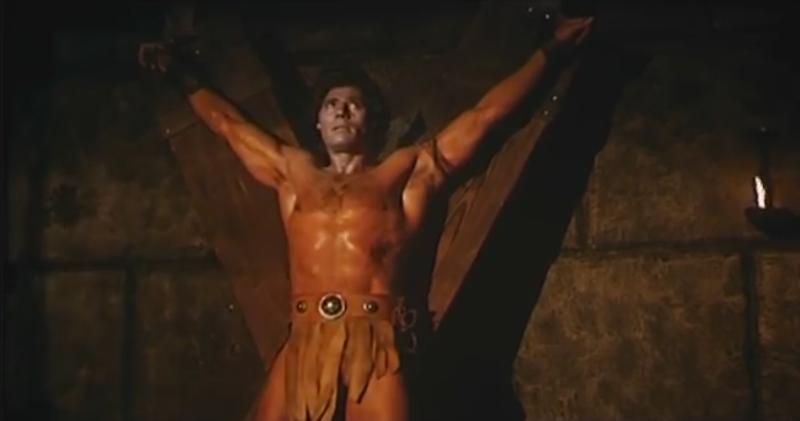 Don't worry, this isn't (just) a tale of terrible lighting and oily pecs, there's romance too! You'll swoon at the unforgettable chemistry between Man Muscle Mountain and the Princess Bipolaria, who likes to wildly ricochet between making out with him and trying to stab him in every scene. He tries to get on her good side by breaking up her forced wedding at the last minute, but the real hero of the day is the fat priest who reads a set of wedding vows longer than the legal disclaimer and warranty for a home auto-electro-asphyxiation rig, making the eclipse go by so that Not the Son of Satan gets roasted by his own petard.

Heroically shoving her abductor onto a chair somehow isn't enough to get the Princess (now Queen) to instantly fall in love with Loincloth Larry, but it doesn't matter because the mob of scruffy villagers gathered in the throne room to celebrate just declare him to be her husband by joyous acclamation:

And with that we've somehow, miraculously, managed to tunnel down to a previously undiscovered rock bottom for women's rights in barbarian movies. Peace is restored to the kingdom, everyone lives happily ever after, just don't ask why there was a brutal war over a stupid fucking chair that actively tries to kill you and doesn't seem to do anything else.

[3] They really missed their chance here to just make him Satan's actual son and just call this movie The Killing Of The Son Of Satan (By The Coward Throne of Fire).