Lesson #2 - Aliens don't know what to do around police... 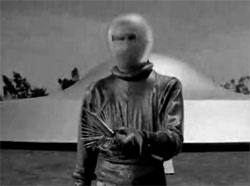 Maybe wait to offer mankind an omelette until after some talking."The Day the Earth Stood Still" is one of my all-time favorite science fiction movies. It opens with a flying-saucer wobbling around Washington D.C. scaring the everliving shit out of everyone. The UFO lands, a hatch opens, and this guy named Klaatu and his dopey robot Gort come walking out. They're surrounded by dozens of soldiers about to brown their trousers thinking they signed up to blast commies not form a cordon around space aliens. All of the soldiers are aiming their rifles, waiting for Klaatu to make the first move.

"We have come to visit you in peace, and with good will," he announces.

Not a bad star, right? Unfortunately, Klaatu gets the bright idea to march up to about three feet away from the line of soldiers, pull out a rod, and then make it snap open into some sort of menacing cyber-whisk. A jumpy soldier decides to show Klaatu how the US Army whisks with his Colt .45 and blasts poor misguided Klaatu in the chest. Cue Gort and some weapon-melting raygun blasts. The rest of the movie is all about Klaatu agonizing over whether or not humans are good or too violent and evil to continue to exist.

Luckily, the innocence of a child convinces Klaatu that humans might not be all bad after all. I guess Klaatu never found himself on the wrong-end of a Gogurt craving tantrum an hour before dinner time or he'd be limping back to his spaceship to atomize the planet.

The point is, aliens have no idea how to handle human authority figures and that's exactly who is going to greet them when they land on earth. That doesn't bode well for our future relations. 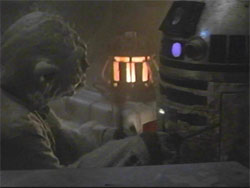 I think Yoda contracted Lyme Disease or gobbled paint chips between movies.It's obvious the aliens who want to eat us, enslave us, eradicate us, or just take over our planet and scuff up our shoes are assholes. What's disconcerting is that the aliens that supposedly want to befriend us are always huge assholes.

In "Contact" the apparently benign aliens send a message using a Hitler TV transmission (never a good sign) with plans for building a sort of gigantic teleporter to get to their planet. After billions of dollars are spent to build this massive machine (twice) Jodie Foster gets into it, teleports to their planet, and it's like a frigging peyote vision quest with her dead father telling her she did a good job. Did the aliens actually do us a favor by tricking us into building the most expensive telephone ever just so they could prank call mankind?

Another example of this trend can be found in the most popular science fiction franchise of all time. Every non-human in "Star Wars" is an utter asshole. They're little flying scrotums wearing dough boy helmets and keeping humans as slaves or miniature monks with a penchant for larceny. Yeah, okay, Yoda is an alright guy, but he still fits the description of "huge asshole." During the first minute he's on screen, he steals Luke's food, a flashlight, and beats R2D2 with his walking stick.

Don't even get me started on "E.T." What kind of horrible parents do aliens have? They leave their spastic child on a planet so he can start on the fast track to adult-onset diabetes by gobbling candy constantly.

The answer to that second question is "no".