The Legend of Big Melon Crush 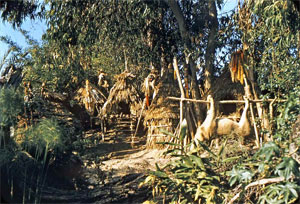 His father, a famous hunter known throughout the jungle, was not there to greet his arrival. He had never been one to settle down, preferring instead to focus on his craft and the multitude of female admirers it brought him. It would be sometime later when he finally entered the boy's life.

From his early days he was an outcast. Born exceptionally stupid, he proved nearly impossible to train and educate. Yet still the members of the village shared the burden of Big Melon Crush, as he came to be known in his teen years. They didn't like him, and some even speculated he was a devil, but they made sure he was washed and fed regardless.

As he grew into his teens, the next generation of villagers began to pick on him. They'd tease him, call him names, push him around, and stack objects on his large head. Big Melon Crush was largely unaware of these actions, and did nothing to resist. His mind, if he had one, was somewhere else entirely.

His seemingly pacifistic response angered the youths further, who took to hurling things at him. One defiant little boy even launched a melon at his head, and set into motion the incredible chain of events that gave Big Melon Crush his name and his legend. The melon was hurled haphazardly, and wobbled through the air on its journey toward the omnipresent head. When it impacted, the melon instantly split into two halves of exactly equal size. It was a perfect symmetrical cut right down the middle.

After the pieces fell to the ground, they were seized by the chief. Though he came to scold the ornery children, he was transfixed by the perfect halving of the melon. He examined Big Melon Crush with wonder and awe, and then ordered the people of the village to bring him melons. Every last member of that village, save Big Melon Crush and the chief, immediately vanished into the jungle in search of the hardy fruit.

Hundreds of melons were procured and stacked in the center of the village. With a captive audience, the chief picked up one particularly large melon and slowly walked toward Big Melon Crush. He held the melon up in front of the boy's head and slowly moved it back and forth, practicing his movements. When he finally struck, the melon split evenly. The chief held the two perfectly equal halves in the air, and the villagers cheered triumphantly.

Tests were performed. Melons were cut with machetes and knives, but no one could cut as perfectly as Big Melon Crush did with his head. This bizarre talent captured everyone's imagination, and they began cracking melons over his head with considerable gusto. It was not that they needed perfectly halved melons, just that nothing else could produce something so beautifully precise.

The melons awoke something in the boy. He learned his first and only trick: crushing melons against his own forehead. If you left him alone with a melon long enough, he would crack it open. He developed a seemingly supernatural understanding of melons, their texture, weight, smell, and thickness. Melons and the act of smashing melons was the only form of communication he knew.

The chief was quick to capitalize on the boy. When he gave his weekly addresses to the village, he did so with the boy by his side and a stack of melons within arm's reach. As he went over his talking points, he would smash melons on the boy's head as if to add exclamation marks to his words. The people were riveted, though more so by the melon smashing than by the lofty rhetoric and increasingly elaborate promises of a new recreation hut.