The Blackwater Lifts All Boats

There is a sequence in the movie "Blade Runner", near the beginning, in which a futuristic flying car takes off through the cityscape of Los Angeles, soaring between the glass canyon walls of unrestricted capitalism and technological progress. The vistas are at once beautiful and terrible, monolithic and dark, with hell-like industrial venting visible across the glittering night time horizon. It's this sinister sparkle that has drawn me to the genre of cyberpunk in fiction, film, and even to an extent in music, for many years. The genre simultaneously acknowledges the impossible potential of mankind to achieve so much and yet poison it all with our terrible human predisposition to greed, violence, and apathy. Many critics argue that this genre is dead and buried, that its concepts of cyberjockies hacking the corporations has become archaic and unnecessary. In that regard the critics are absolutely right, computer hackers aren't the 21st century's Robin Hood or Mandela, they're just silly kids defacing websites and scammers running identity theft rings. To me cyberpunk was never about the heroes and heroines of the various novels, it was about the seductive nature of technology, the idea that the stunning beauty of our artifice could so entrance us that we would be willing to give up everything else for it. Crude mechanical hearts gave way to crude mechanical eyes and ears, implants that address the most complex portions of the human anatomy. The power of governments throughout the world seemed to wane while the power of corporations has never been greater. Even as information and the media has never seemed more vital to the global economy Gibson's prediction of an Internet based devaluation of consumer data seems yet more prophetic. You can download films the day they appear in theaters. If you live in China you can walk into a legitimate business and buy DVDs of American movies or Japanese games for a twentieth of the cost they actually retail for.

I'm ready to go ahead and make the bold declaration that we're here. We've come a long way baby, but welcome to the cyberpunk future! The last straw for me was an article I read a few months back about a corporation being employed by the US Government in Iraq. It's called Blackwater USA, and it embodies the absolute ideal of a cyberpunk corporation. Beneath a photograph of men in black armored uniforms holding sub machine guns the text on the company's website reads "We have established a global presence and provide training and tactical solutions for the 21st century." In the case of Iraq, Blackwater has been contracted by the government to provide armed security for US facilities, officials, and even in some cases military bases. I was under the impression that these tasks would fall under the aegis of the military itself, but in this costly and dangerous world I guess Blackwater was capable of offering a better deal than our own military.

Blackwater operatives are elite, drawn from the ranks of the US Special Forces and intelligence community. They are often better equipped than our own military in terms of per-man capability and they are certainly better paid, making four or five times as much as what the government pays a soldier. Which begs the question, how exactly is it a good deal to use Blackwater? The answer, as all answers are in today's cyberpunk world, is impossible to know for certain.

Jean Baudrillard believes that in our postmodern world we model our lives on simulations of life. A simulation is generated by the media from nothing and we attempt to emulate that perfect model. This idea of simulacra is integral to the cyberpunk world in which we live. When politicians spar on CNN neither provides an actual answer, an actual truth, both provide a simulation structured for consumption and ease of use. So is the case with Blackwater, which exists in simulacra to provide security for soldiers who are providing security for a simulation of democracy that was created in a cabinet meeting in 2001. Your perception is colored only by the simulacra itself; it has become our reality. Our world is an existential hell, our lives and reality defined entirely by the media we absorb. Control through media. War through propaganda. The all too real deaths of more than a thousand men and women in Iraq are nothing but a number to be used by one head of the hydra to attack another. Terrorism, itself a dark face of propaganda, has become much the same. Flags are raised on the skeleton of the World Trade Center and we solemnly duck our heads and observe a minute of silence like Muslims bowing to the call of the muezzin. Honor the firefighters who gave their lives so bravely on that terrible day by watching a tribute on Fox News. Then maybe watch it again when it gets replayed three hours later just because you think they would like that in heaven. Or, if you prefer, hang on every word of Al Jazeera as they describe the vicious attacks perpetrated by the Americans on the innocent Iraqi civilians.

The simulation of choice. Good and evildoers. Right and wrong. Democrat and Republican. Terrorism and Freedom. Five thousand years of human strife and struggle condensed to thirty characters on the CNN ticker, visible as merrily rolling sentence fragments beneath the smiling face of Anderson Cooper. Here we are baby, the future is now, and you'll find those sinister glass canyons of Blade Runner on one of a thousand channels available through Direct TV. Vote in today's web poll! The topic: is any of this shit really happening? Is there any fucking truth? When you get diabetes and go blind from eating all those Twinkies you bought at Wal-Mart just remember that our incredible science will make you new eyes. Better ones. We have the technology. You won't even have to worry anymore about whether what you're seeing is real or not. Just winking pixels and phosphenes flickering through your cerebral cortex, electric current channeled on hair-thin wires straight to your brain, and it's out of sight!

Dr. David Thorpe has been swamped with requests to make fun of various modern rock sensations for quite some time, and in his infinite kindlieness he has decided to give the people what they want. This week, he will plow through Franz Ferdinand, Interpol, Muse, and more. 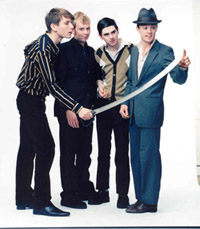 "Even aside from the fact that they have the worst name of any band that I can recall (and of course we all lived through everyone from Kajagoogoo to Limp Bizkit), the Yeah Yeah Yeahs can pretty much go fuck themselves. The lead singer, Karen O, is a histrionic morlock who dresses like she's headed for a haunted middle school dance in 1985."

We hope that you're prepared for another satisfying feast of bitchy comedy from the Internet's most disagreeable old asshole.