A.P. Brown is the Guarantor of Absolute Satisfaction

AN ESCAPE TO NATURAL WONDERS OF LESSER AMERICA


It has been said in circles of the Mississippi Orient that include men the likes of Grover Cleveland that I am so productive I once stared intently at a photograph of a woman that was not even my wife and left her with child. I must confess that this is only partially true, but as an anecdote of my copiously productive nature it is accurate. Those who accept such words will find no surprise waiting when I tell them that during my recent business adventure beyond the border of our Union I took the opportunity to further myself and the world in the name of science.

While undertaking a harrowing cross-continental journey of Lesser America I sought out interesting fauna as yet undiscovered by educated men. These creatures I recorded in my journal and then shot through the brain with my Springfield repeating rifle. My family artist, Hesper Losefik, was then tasked with capturing the essence of the creature as it might have been before a .30-.30 bullet passed through its cerebellum. In this context, limited though its space may be, I am proud to convey to you a sample of my hard work in progress on the subject.

Sensitive readers, beware. Some of the creatures I have cataloged may be considered strange or unearthly. Attempt to comfort yourself in the knowledge that they have already been dealt with harshly. 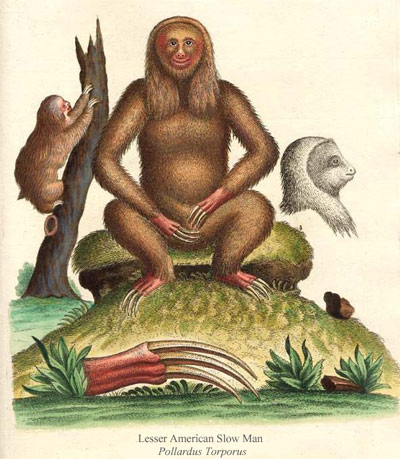 This specimen was encountered near the edge of the foreboding jungle, clinging to a fig tree that nearly reached to the sun by my estimation. At first I mistook it for one of the tiny savages dwelling within that jungle, but when it did not answer my translator I realized my error. The slow man moved with a mocking laziness, seemingly content to cling to branches with its fearsome talons and disrespect the protestant work ethic. This haughty demeanor set me ill at ease and I was quick to open fire and dynamite its remains. 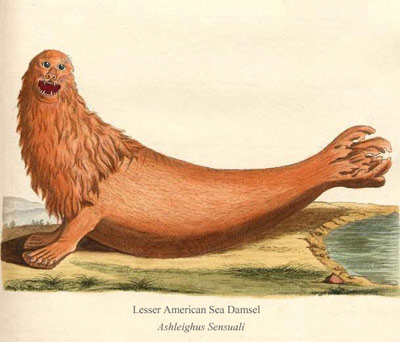 This terrible temptress was encountered near the end of our voyage when our minds and bodies were at our weakest. From a distance she appeared beautiful and winsome, frolicking gaily about the beach with an exotic gait that suggested the embrace of a man with a woman. Many of my cannon-bearers had to be lashed and my Turkish guard Ferok had to discharge his pistol into the air to dissuade them from succumbing to her wiles.

I approached cautiously and, I am afraid, with lascivious thoughts in my head. As I drew near, the sea damsel reared up like a cobra of the Far East. The illusion was shattered and I beheld a face of fangs and fur. She began to bark like a fool mastiff gotten into the brandy cellar and she shambled her rippling bulk in my direction. Realizing the game of seduction she had played me at I drew a bead and brought her down with a single well-placed bullet. 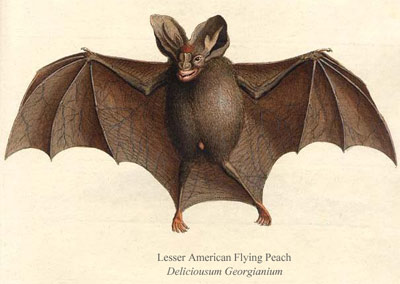 If ever you hear a man claim a place to be God-forsaken slap him about the face and remind him forcefully that God's light reaches even the most benighted jungle cave of His creation. Such was even the case in Lesser America. With scarcely enough food or water to sustain us through our arduous journey many of the men had fallen to despair. We had run out of salted cat days earlier and had been reduced to drinking the water that collected in the folds of the tarp that covered our dead in the corpse wagon. I knew we had nearly reached the breaking point, so I set out in search of water and food.

I happened upon a cave. Thinking to find mushrooms or some other edible spore I crept quietly into the cave lest I awaken some terrible jungle demon. Imagine my surprise when I found, instead of dry fungus, a cave filled to overflowing with thousands of fuzzy brown peaches. What's more, after I had plucked a few and tasted their sweet juices I found them suddenly screeching and filling the air in great swarms. They emerged from the cave by the thousands. I called to the men and we filled our arms and baskets with the fruit. So great was their number that one had simply to open his mouth and they would fly down his gullet and fill up his belly in minutes. Truly, God's benevolent power reaches to every corner of the compass.

A FINE AND FINAL ANNOUNCEMENT 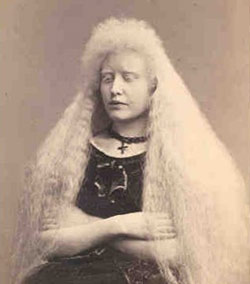 A creature so fair has never before been seen upon the face of Missouri.I am glad to congratulate my competitor, P.B. Fouke, on his marriage to a woman born of man. I am sure this new wife will prove every bit as excellent as your line of products and services for fur trappers.

Nuptials must be a catching diseases in Missouri, for I find myself newly wed as well to the honorable lady Bronwyn Brown of the Chesapeake Bay Browns. Though I am told she is my cousin, it was upon our first meeting that she already felt as close to me as my own sister.

After careful negotiations Bronwyn agreed to submit herself to the rules of my household and to accept into her womb no less than nine children, of which no more than three may be born without life and no more than two in addition to that may expire before their first year.

Bronwyn is the most beautiful creature I have ever encountered on the face of Missouri. I have little doubt that she will provide me endless delights, both intellectual and matrimonial, and that she will one day sire a son for me without the terrible affliction of left-handedness.

With Tidings to All Good Men,
Ashleigh Pollard Brown