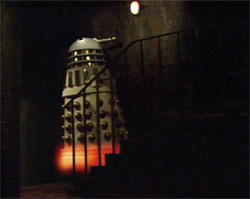 Common misconception about stairs, but they do dislike them.Work here isn't too bad compared to the mines. Hurk has me spend the mornings clearing brush and sweeping leaves off the concrete outside their house. These tossers can't deal with any obstructions.

Hurk is rather quiet for a Dalek. Scarcely an "exterminate" out of him all morning. Jason is the opposite. He hardly has any chorse for me and he likes to talk rubbish about anything and everything. It is a bit odd being asked, "HAVE YOU EV-ER BEEN TO CUM-BER-LAND?"

Jason's modulated voice does not match up to his casual chat. I was shocked when he asked me,"WOULD YOU TAKE A BIS-CUIT WITH YOUR TEA?"

The biscuit was a puck of pure sodium and the tea was just rainwater Jason extracted from an external cistern, but he meant well. You can't say that about many Daleks.

Hruk pronounced that tomorrow I'm to drive for Jason. Why own a car when you can't drive? Dunno, maybe there was another slave before me, but I don't want to get started down that imaginatory avenue.

We'll be off to the Tescos in Dalekopolis to purchase groceries. I'm excited about the possibility of going to a city, but I am also fearful of the groceries Daleks might purchase. I cannot help but think it is going to involve humans and pickling. 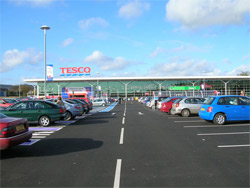 Shops are similar to earth, but strangely lifeless and soul-sucking.Went to the Tescos today. The Daleks seem to all own Astra hatchbacks from the 80s. It's absurd trying to get the bleeders in there. I had to heft Jason in sideways through the hatchback and tie it down with him sticking half out. He complained the whole way that he was getting ill. When we arrived at the carpack he opened his hatch and spurted green sick onto the pavement.

There weren't many other cars on the roadway, but those I saw were all Astras with Daleks poking out the back. Every Dalek has a slave driver, most of the humans, but also I saw some wolfmen and a Cyberman or two. Thank god I weren't snatched up by the Cybermen. They don't muck around with exterminating and making you a slave, they just turn you into one of them straight off.

My fears about the Tescos were at least misguided. It was mostly different kinds of goops and blocks of minerals, plus sundry goods for us slaves to use when caring for our Dalek masters.

Jason misbehaved a bit, got all snared up in an extension cable and insisted on pushing the cart even though he couldn't control it properly. Every time I'd stop to get something I would turn and he'd bang the cart right into my shins and then laugh "HA-HA-HA-HA" real slowly. He did let me throw a couple boxes of "human wafers" into the cart, which it said on the tin are "treats for humans."

Not too sure what else I'm expected to eat and Jason started to get impatient once the list was filled so we had to leave. 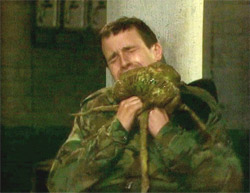 Usually when you see a Dalek he's either dead or bitin' on your face.Weird thing happened tonight. I was down in the basement and there was this terrible dripping from the walls and I couldn't get to sleep. I went upstairs and opened the wrong door on my way outside to have a slash.

Inside the storage closet there was a colored light bulb shedding reddish orange light like those heat lamps they use at a chip shop. I squint at the light and hear "CLOSE THE DOOR HU-MAN!" in an urgent Dalek voice. I only catch a glimpse before I shut the door, but I know what I saw

I saw Hurk and Jason with their hatches open. Their robotic arms had tongs like the kind you use for pasta and they were pinching each other and twisting their arms a little bit. Jason, I think, was making an "OOOOOOOOO" sound.