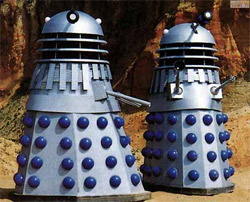 This photo looks fine to you, but all I see is peril for these poor Daleks. Hurk and Jason were waiting for me when I came upstairs. They backed me into a corner and kept asking me, "WHAT DID YOU SEE HU-MAN?"

I was telling them I saw nawt and they would say "CORR-ECT YOU SAW NAWT!" and then just ask me again.

Finally Jason rolled off and Hurk said, "HU-MANS THAT SEE THINGS ARE EX-TERM-INATED!" I let him know I understood and he just told me to go shovel a ditch out in the backyard. It's what they make me do whenever they're mad at me.

Not sure I want to think about what I actually did see. 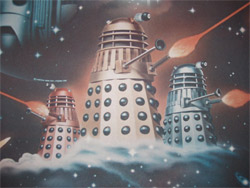 The mural on the side of the YDCA.Jason fell into the pool particularly badly today. My theory on why they have a swimming pool is complicated, but the meat of it is that I think the Daleks came to earth and saw our towns and how we live and decided to live more like us because we seemed happier. On reflection, I suppose it isn't so complicated.

The point is, they have all these things and do all these things even if they are dangerous. Like a pool in middle of the concrete slab behind the house. They can't swim in it. They can't even take care of it properly. It's just a hazard waiting for an accident. Hurk fell in right after I got here and today's fall makes Jason's third time.

Daleks can't really see downward very much, so if they're not paying attention to where they're going they can fall or end up, god forbid, tipping over and crashing down a hill. The pool is particularly dangerous for them, because even though their robot suits are air-tight, they only have about an hour's air in them. If the water covers up their speaker nubs then they're done.

Lucky for Jason, I burned Hurk's noontime Dalek biscuits in the plasma oven. After a tantrum and a few threats of extermination, Hurk sent me out back to dig another ditch. That's when I found Jason in the pool.

I took him for dead at first, but then he saw me and started rolling around on the bottom of the pool trying to get my attention. I got the pool pulley and put the straps around him. Got him hoisted out of there. He'd nearly run out of air to breathe and of course he blamed my "HU-MAN WIT-LESS-NESS" for his peril.

They're all bluster though. I could tell Hurk was glad for what I'd done and he let me off ditch digging duty by telling me I was "TOO FEE-BLE TO DIG A PROP-ER DITCH ANY-WAY."

I'm beginning to understand that all Daleks say hateful things, but it's the way they say those things that let you know their true feelings. 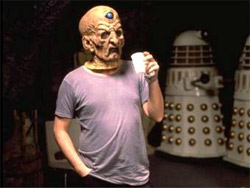 Davros at an East End Dalek loft party.Today I learned what Hurk and Jason do to earn their livings. I had been wondering about that since I got here.

Hurk used to be a Dalek exterminator, traveling space and time disintegrating various people and objects. He pulled that disintegrate lever so many times he ended up with a nasty case of carpal tunnel. Now he's a pensioner.

Jason is a bit younger and never joined one of the extermination fleets. That is really looked down upon in Dalek society. He's on the dole as well and in his spare time he makes scrap art out of things that have been disintegrated or partially disintegrated.

He showed me his "Tree of Davros" that is made up of ashes from a tree that was disintegrated and his "Terrarium of Davros" that was created from pieces of a terrarium and a bearded lizard that remained following disintegration. They're both quite nice, really.

He also hinted at a masterwork he calls "Legacy of Davros" that Hurk has been helping with. I think it involves things that have been disintegrated.