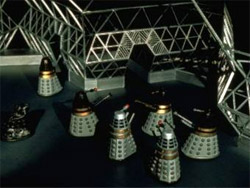 Hurk was sleep rolling again. He got outside and off the concrete and managed to tip himself into a ditch. By the time I heard him wailing for help he had been in there a good few hours, rolling back and forth like a sausage, his little stick arms flailing around uselessly.

He tried to disintegrate me twice while I was wrestling him out of the ditch, but his arms were bent out of shape so badly he just took the tops off a few concrete geese. Jason swept up the ashes of the geese to use for one of his art projects.

I got Hurk back in the house, but he was totally inconsolable. I made him some warm Dalek milk and fed it in through his drinking tube and he finally calmed down enough to speak sensibly.

I convinced him to pop open his hatch and let me have a look at his tiny little mutant body. He looked like a pair of green bollocks wearing a wig, but I could sense right away that something was wrong. His beaky little mouth was oozing brown liquid and his feeble tentacles were tangled up like shoelaces.

I poked and prodded him while he screeched at me and Jason hovered over my shoulder. I could patch him up a bit from what I knew about Dalek anatomy, but his injuries were more serious than I could repair. I realized this shortly before I made the biggest mistake since my arrival at the house.
"Perhaps I could drive him to hospital," I said, "to see the doctor."

Oliver Cromwell, the screams they made! 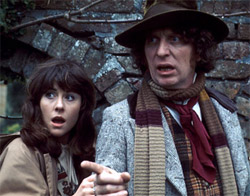 They both started spinning in circles and flailing their mechanical stick arms around. Hurk's hatch was still open so he was sloshing that brown liquid all over the kitchen.

Luckily, I was close enough to the basement door to dive down the steps when they started firing their disintegrators. It took them a good ten minutes of blasting away madly to wear themselves out.

When I finally popped my head up they had spun themselves into opposite corners and were rocking back and forth mumbling. The kitchen was in ruins. Holes clean through the walls and ceilings, appliances reduced to ash and slag.

It'll be days before I can fix all the damage, and who knows what Hurk and Jason are going to do to me when they regain their senses. 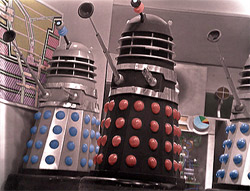 Dalek friends and well-wishers.For the past few days I have been wondering if Hurk is going to make a recovery. I got my answer.

I had been filling the ditches per Jason's instructions all day and when I came back into the house I tracked in a lot of mud. Daleks hate mud and dirt, interferes with their mechanical parts I suppose, so I knew I had to get it cleaned up quickly. I walked over to the closet to get the laser broom and I was treated to a repeat of the scene from my first week here.

Hurk and Jason both had their hatches open under the orange heat lamp and they were prodding each other with what looked like two-tined forks. Sort of like tuning forks. Hurk looked a bit worse for wear, but otherwise he seemed to be enjoying himself.

I can't be sure, but I think they were having one off together. They were having such a time of it they didn't notice me immediately. I just watched, dumbfounded and slightly nauseated.

Jason made cycloptic eye-contact with me. I said nothing, but closed the door. 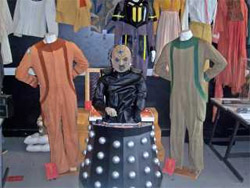 Even Davros likes to play dress-up. Jason, Hurk, and I have reached an agreement. I will not speak of their illicit relationship, nor speak the word "doctor" in their presence. In exchange, I no longer have to dig ditches (in a moment of right-headedness Jason reasoned they were a hazard) and I will be allowed some small degree of input at the grocer's.

I have also learned that there is a county fair featuring a slave pageant coming up and I will be permitted to attend. It's held as a party for slaves to socialize, although the Daleks treat it more as a chance to groom and dress up their slaves and show them off to the other Daleks.

I'm not too interested in the grooming and the dressing up part, but it might be nice to make a friend or two in the area. At least one that doesn't want to exterminate me from time to time.

Try as I might, I can't hate them completely. Maybe other Daleks, but not my Daleks. Honking nutters though they may be, I feel almost like they are my children. They are my evil metal nonces and they rely on me.

Someday, maybe even someday soon, they will probably exterminate me. It's just the Dalek way. But I say, better to have lived and been disintegrated, than not lived at all.

Don't tell Jason or Hurk I said that though. I don't want them getting any ideas.