Following on the heels of Lowtax's update about the state of affairs here at Something Awful is not something I was particularly looking forward to. But Lowtax, or "R-Lo" as we like to call him around the "office", is a merciless foreman and not above administering a stern beating to insubordinates. The moment I heard about the depth of the troubles he is having I sent him a card with a little insert I think he might find more than helpful. 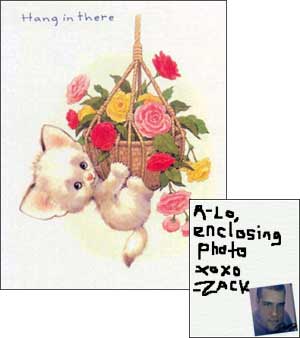 I offered up the inspiring wisdom of the hanging kitten and sought to additionally bolster his spirits by including an autographed glamour shot of myself. Needless to say I run a fiscally unsuccessful web site as well, so I don't have any money to give the rat bastard. My writing isn't normally that sloppy, but I was on another one of my "trips" where I spend all day doing vodka shots and slicing open my forearms with a box cutter just to know I am alive.

Dave Barry Can Lick My Ass 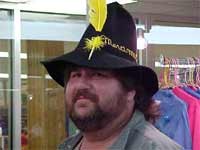 You wanna see mah surgery scar? What's wrong city boy, never been cut?You can always tell the economy is going downhill when your apartment building starts to clear out. Either that or my former neighbors caught wind of what I have dissolving in my bathtub, but I doubt it because I use an entire can of air freshener in there every day. Regardless of why they are all leaving, it is really beginning to concern me.

The first to go were the 500 hillbillies who lived across the hall. They enjoyed such wonderful apartment complex activities as:

Sitting in front of an open window in the dead of winter blasting country music and staring at you with hungry eyes.

Having screaming matches with their front door open and one of the people doing the screaming loitering in the hall drinking a can of Beast and scratching his appendectomy scars.

Filing out of their apartment en masse. It took like ten minutes for all of these people to get out of the apartment moving at a steady jog. Seriously, like 500 of them.

Come to think of it, that last one might have been why they left. Weeks after they went the way of the dinosaur (to the jail) they were followed by the people who lived immediately below me. These people were affable people of roughly my age who liked to have parties on the weekend and blast the same rap song over and over again on a sound system that made my fillings vibrate. I don't even have fillings. On the up side, they didn't complain when I watched my DVD of Super Mega-Tokyo Demon Explosion Nightmare at 4 AM. They also never invited me to their parties either, so they can die.

The latest flight from my apartment complex was the infamous "laundry family". Now there were a lot of hillbillies in the apartment across from me, but no single address has ever generated more human beings than the apartment below me on laundry day. I would never see or hear them the entire week, except laundry day, and then I would be getting into or out of my car and literally a dozen teenagers and younger kids would come out of the building carrying basket after heaping basket of dirty laundry. I assume it was dirty, I suppose it could have been clean and they were just transferring a steady stream of clean clothes to new locations every week.

The worst part of all of this is that the one apartment that has yet to clear out is of course occupied by the people I would most like to see go. They live above me, and much like Lowtax's neighbors, they have a herd of obese livestock running rampant in their apartment. Actually, I envision them as having small heads and upper bodies with giant and immensely fat lower bodies. Buried beneath these layers of sonic leg blubber are incredible muscles that propel their bulk around at all times of the day and night, their distended legs serving as nightmare pile drivers. Never music, never TV, just 24/7 Paul Bunyon and Babe the Blue Ox doing jumping jacks above me.

They are also the only people that have ever complained about the noise level coming out of my hellhole. I'm sorry, she was a screamer.