Everyone in Their Place

Whoever said "neatness counts" failed to capture the importance of being organized. I would have chosen something a bit more laden with melodrama like "order is life" or maybe a full-fledged and inspiring aphorism like "the patient who is careless to begin has flesh that will know the knife again." I am a strong believer in the idea that every person and thing has its proper place in the world. Some may struggle for years or even decades in a feeble attempt to understand their own path in life, to find their own way, but I am a guiding beacon for those ships lost at sea. In my hours spent sundered from the tender bosom of Something Awful I serve as the chief guidance counselor and unchallenged diviner of ways at Forsaken Heath High School.

From the malleable lumps of meat, viscera and stupidity presented to me by the teachers I discern the true course. I am dispassionate in my divinization, for to show an ounce of compassion or understanding for these fleshy cogs in the wheels of human society is to color my absolute and irrevocable judgment with feeling and uncertainty. It is a burden of responsibility, yet it is also something in which I take great pride. For every ten thousand "hog processors," one thousand "mop operators," and one hundred "marginally employed layabouts," I reveal the way for a "disgraced senator" or "upper-management porn downloader."

Expertise such as I possess is in high demand. In my personal life I often find myself assailed with questions by those who were not so fortunate as to have been vetted and released through Forsaken Heath. Honestly, what these other counselors are telling those being introduced to society is shameful. "Your great interest in drawing anime characters demonstrates to me that if you try hard enough and simply apply yourself you can paint with the masters!" Absolute rot. These hacks are telling people that if they simply TRY they can become anything. Oh, what a delightful and magical world we live in where opportunity awaits you if you simply resist everything we just finished explaining to you for 12 years. Yes, maybe if you want it bad enough you can become a caterpillar or a pony! Perhaps if you just practice and love it with all your fool heart you will one day turn into a cherry-red fire truck! 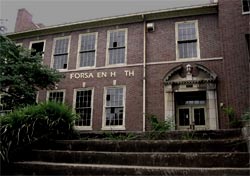 The school of smart knocks.When I try to engage these pompous idiots in a debate they will point to someone like Picasso or Mozart and say "see, anything is possible!" Quite! Misery, poverty, dementia and suicide are not only possible but probable when those meant to guide are instead lying. Picasso and Mozart were flukes. They were poor souls who slipped through the gaping fissures in the system and were allowed to drift, alone and lost, joyless and penniless, because some moronic counselor told them they could do whatever they wanted if they simply applied themselves. I've been over Mozart's files. He would have made an exceptionally satisfactory cobbler and Picasso's aptitude scores at metal press operation were phenomenally adequate.

It's time for me to do the job of all those guidance counselors who have failed. I am tired of seeing good productive members of society going to waste. Perhaps more importantly, I am tired of answering questions individually and would like to compile my career-shaping advice into a single mass-media source.

I am going to ask several questions to help you determine your future career path. It is important that you respond to each honestly. Since I do not have the time to counsel each of you on an individual basis I will also offer some insight into what each answer should mean to you. 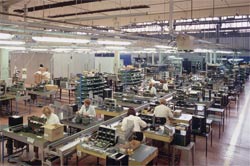 The joy of contributing.Question #1: At what age will you be entering the job market?
Possible Answers:

1) 8-12 - If you're 8-12 slave labor laws will prevent you from earning a living wage within the continental United States and most of Europe. I say damn the laws and kudos on your drive to become a productive member of society! If you're comfortable with your body and are not afraid of adults you can make an excellent wage as a "personal satisfaction specialist" in parts of Russia, the Middle East and South East Asia. Girls and feminine boys are best equipped for this sort of work and, rare among careers, the younger the better! Hop a freighter to Bangkok and get a jumpstart on modern living.

2) 13-17 - You're getting a bit long in the tooth for a "personal satisfaction specialist" but you may still be able to get by if you've been taking the right hormone supplements. If you're stuck in the United States you're still not eligible for full time employment, so print this out and tape it to the wall of your bedroom. Pray to it and read it over and over until the age of 18, then you'll be prepared to answer question two.

4) 20-50 - Proceed to question two, but please keep in mind that at this late point there is only so much I can do to set you back on the right track.

5) 50 + - If you had followed a proper career path you should have your basic needs covered or nearly covered as a ward of the state. For those of you who insist on entering the job market at this antediluvian phase you'll need to keep in mind that your faculties are failing. You're slow, stupid and probably impaired in more than one way. Your efficiency is in the bottom quartile and there is very little reason for your continued existence. I would suggest you practice waving your hand and smiling in a non-threatening manner and shuffle - don't run, I don't want your hips on my hands - to the nearest Wal*Mart to apply as a greeter.

Question #2: Which three skills from the following list best match your abilities? 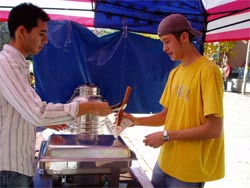 Could this be YOU?!?!? If you're lucky!There is obviously a wide variety of possible combinations of answers to this question and as such I cannot divine the exact meaning for you. Roughly a third of the answers are completely worthless and it is possible to select three worthless choices like Drawing Anime Characters, Enabling the Community and Helping People. If the guidance counselor is doing his or her job properly and you choose a worthless trifecta then you will be given an address which you should go to immediately. When the man in the white coat asks you to sign the forms and then take the pill you definitely should because a new life of productivity is waiting!

If you managed to sneak by only selecting two of the worthless choices then you'll be given one of the following jobs:

Don't be fooled, these all consist of a productive life of permanent incarceration. Look on the bright side: at least you aren't having your organs harvested. Everyone else should move on to the third and final question. 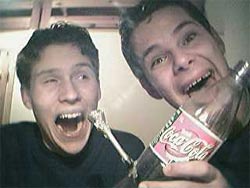 Look at their joy.Question #3: Which is more important to you: money or happiness?

1) Money - You are purpose-driven and rational. You know the world (or the good parts at least) operates on a capital basis. The more money you can accumulate the better you are. That's not to imply that the poor are worthless. To the contrary, the wealthy would not be able to exist without the help of the poor and without the wealthy the poor wouldn't have all of the government services they depend on. Everyone has their place. For those who think money is more important but still want to be happy, great news: happiness is available in small increments for the exact price of your favorite consumer good. DVDs, videogames, novels, music, sexual favors, drugs, any or all of these things are readily available at a reasonable price and purpose-made to increase your happiness quotient.

2) Happiness - What exactly is happiness? It's elusive and ill-defined. If you picked happiness you're probably extremely unhappy. Chances are you've been laboring under the misguided belief that you're an artist. You're not! You have your place in the mass-media production industry. Plenty of people have to work to produce all of the things that make everyone else happy. If you don't believe art should be sold then you're doomed to a life of unhappiness so why did you even pick happiness? Don't bother answering, the authorities have already been alerted.

Where do you go from here? That's up to you. Once you walk out the door of my office I am absolved of any and all responsibility for your actions. I could tell you to become a serial killer and as long as you don't start until you leave my office I'm in the clear. Ha ha, just a little joke. Serial killer was removed as one of the choices in 1998.