How to Escape From a Conversation About Fantasy Football 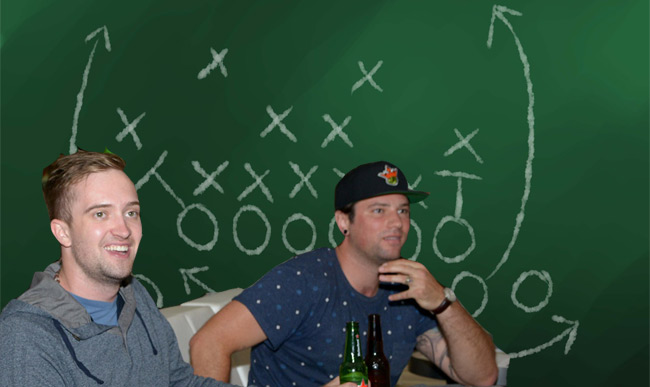 It happened again. You were in the office or socializing with friends, when suddenly you became trapped in the fantasy football vortex. You're not playing fantasy football, maybe you don't even like football, but your friends don't care. They want to tell you about what a bad Sunday they had in their league, who they picked up on waivers, their stupid fake team's record, and how some guy named Russell Wilson is a real piece of garbage that has been killing their score since week one.
If only there were some way to escape from this nightmare.
Have faith! Getting out of a conversation about fantasy football is as easy as driving up the D/ST score of whichever team is playing against Jay Cutler.

It's Called an Ouroboros
Interrupt them and calmly explain that you take the Patriots every time because of Brady and you just choose whatever play Madden suggests. When they try to explain that they're not talking about Madden, roll up your shirt sleeve to show them your "Semper Games" tattoo. Roll up your sleeve a little higher to reveal your lifelike ink of John Madden sucking his own dick.
Sorry, Can't Hear You!
Try becoming the "smoothie guy" at work or among your friends. Whenever they try to talk to you about fantasy football, take out your portable blender and begin blending ingredients for a smoothie. If they continue to talk to you while you are running the blender, shrug and gesture helplessly at your ears, starting the blender again whenever they start talking. Live your life with the blender and various smoothie ingredients in a small backpack. Talk mainly about blenders and blending and live the "smoothie guy" lifestyle. Marry a "smoothie gal" and settle down to raise your children in a household constantly oppressed by the sound of a blender struggling on ice chunks.
A Modest Proposal
Get down on one knee and propose marriage to your friend. Soon after you have married, take out an insurance policy on yourself in secret. Fake your own death, collect the insurance money, and frame your friend for murder. As they await the death penalty, you are free to start a new life in the third world, free of fantasy football.
No Such Thing as a Dangerous League
Interrupt them as soon as they begin talking and ask, "Are you talking about fantasy football?" When they answer affirmatively, say, "The real fantasy is the idea that pitbulls are a dangerous breed." Launch into a well-rehearsed rant about the misleading nature of fatal dog attack statistics and unfair stereotyping of pitbulls. Repeat this as many times as needed while your computer displays a slideshow of photos of babies sleeping with pitbulls.
A Winning Strategy (Office Only)
Repeatedly speak Charlie Sheen's favorite catchphrase. Stare at them with a joyless expression and dead eyes and say, through clenched teeth, again and again, "Winning." Do this over and over until the word loses all meaning and is just a disconnected series of sounds. Say nothing else. Slowly walk backwards into a cubicle covered from floor to ceiling in Post Its with "Winning" written on them. Sit down in your chair and rotate to face a blank desk. Pretend to type on nothing as you continue the chant.
The Elevator
Stop them immediately with a "ding" sound and pretend to step into an elevator. Descend smoothly behind a piece of furniture and remain hidden until they leave. If they walk around to look for you behind the furniture then pretend to be dead. If they try to revive you, pretend to be resuscitated. Immediately exclaim about the reality of an afterlife, that you were in a perfect, heaven-like location where everyone was happy and peaceful. And anyone who played fantasy football in life was rejected at the gates and sent straight to hell for an eternity of torment. Write a book about this experience, tour the book and appear on major TV shows explaining that the worst sin is fantasy football. After your tour, retire on the proceeds from the book, now able to afford a hacienda and guards to allow you to remain in total isolation.

If none of these methods work in extricating you from a conversation about fantasy football with a friend or coworker, your final option is to join their fantasy football league. Once in the league, you can shadow them, learn their habits and schedule, and engage in a series of devilishly clever murders to kill everyone else in the league. Once they're all dead, you might have a chance even though you drafted Romo first round.