Your finger is on the table. It's usually on your hand.

You thought this would end with everyone approaching you in a single file line and saying "That was very impressive and cool," but instead they are recoiling, turning away, gasping, or scrunching their faces up in disgust as ropey tendrils of blood arc toward them.

An email invites you to join the weekly Ten Finger Club dinner party but you must decline. In your response, you politely explain that while the recent removal of your eleventh finger qualifies you to become a member, you're still feeling under the weather due to blood loss. Maybe next week. 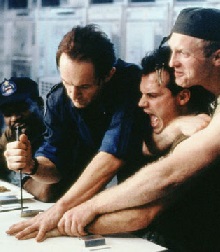 Go out on the back porch. Whistle for your finger to come in for dinner. No response.

The numbers floating above your head get smaller as the combo chain suddenly ends.

Your right arm is hooked up to a lie detector. No problem. You've got this. You say "no" and frown as the needle goes wild. This is perplexing. After all, the test administrator only asked if you've ever lost a finger in the knife game. A simple question to establish a baseline reading, or so you thought. Slowly, nearly against your will, you follow a nagging suspicion and turn your head. There, your left hand is sprawled on a table. You see the knife. The score marks gouged into the wooden tabletop. The rolling finger as it wobbles to a stop. Son of a...

Your finger would like to add you to its professional network on LinkedIn.

You begin to pull into parking spot. A sign on the curb has a red circle and diagonal line on top of the image of a disfigured hand and knife on a table. The parking attendant steps into your path, shaking his head while gesturing for you to back up.

You visit AmazingVennDiagrams.com, as you do every day. Something's wrong. Your favorite venn diagram has changed. The circles labeled "You" and "People Who Haven't Lost A Finger While Playing The Knife Game" no longer overlap.

You're sitting on a toilet. Every few seconds you nervously check your watch. Is it normal to feel this nervous? Or are other people better prepared to face such potentially life-changing moments? Time's up. You shake the white plastic stick. There, in the result window, is a blue severed finger.