I'm Dreaming of a Zombie Christmas 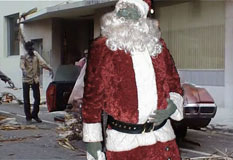 Delivering presents and eating brains are both on the menu this year for Santa!Much like most of you my thoughts these days have been turned to the splendor of Christmas. Unlike most of you, hopefully at least, my thoughts have wandered on to mix the holiday with this sort of spiritual obsession I have with the living dead. Every waking moment is spent either contemplating the proper hue of zombies - the right mixture of blue, gray, and green to give them both a corpse-like pallor and an otherworldly menace - and the best way to decorate our apartment with festive Christmas Lighting. My viewing list of films has been shortened to include only "It's a Wonderful Life", "Dawn of the Dead", and "Day of the Dead", all three classics in their own way. While contemplating the deep societal importance of zombies is one of my favorite pastimes, somehow fusing it with Christmas has left me very disturbed.

It seems on the surface that a holiday to celebrate the birth of Jesus and give gifts has nothing in common with a shambling pack of brain-hungry zombies, but there really is a connection there. I mean hell, Jesus actually came back from the dead, and although the Bible says it was because he was the Son of God and had some other stuff to do or something, my theory is he was bitten by a zombie while crucified. I mean really, you stick someone up on a cross and that's pretty much a big sign for zombies saying "free meal".

"Blashpemy!" you say in that really self-righteous voice you use whenever you're mad at your dog for chewing on your favorite issues of "Hi-Lites for Kids".

I can understand that sentiment, but the whole "arise from your grave" connection isn't the only one between the holiday of Christmas and zombies. Here are a few more for your brain to chew on, so shamble on over to your reading glasses, moan slightly, drool and then put them on and get ready to have your stereotypical costume that you were killed in get blown completely off! 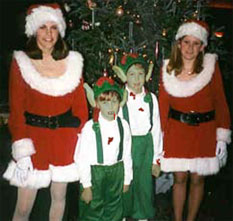 The elves prepare for some sock work, guided by a pair of Santa's hand-picked elf wranglers.

Jesus was born to a virgin and technically a virgin could get turned into a zombie and then bite someone else and turn them into a zombie.

Rudolph the Red-Nose Reindeer was able to lead Santa through dense fog and if you know the secret entrance to a hideout and get turned into a zombie you can lead the other zombies back to the hideout.

Caroling is roughly as entertaining and heart warming as listening to the wailing of zombies attempting to batter their way inside your boarded-up house.

Have you ever wondered why as a kid you would ask for some action figures and then end up with a trash bag full of socks? That's because the elves that toil in Santa's workshop are actually pint-sized zombies, with the motor skills to make only socks and driven by their end-of-day reward of a pail of human organs.

Holiday parades and pageants are similar in appearance to a river of the uncoordinated undead shuffling slowly through a city scoured free of human life. There tend to be roughly half as many zombies in marching-band uniforms though.

I may not have done a very good job of convincing you that zombies and Christmas have a lot of things in common, but I was undaunted. If Christmas wasn't about zombies then I would MAKE it about zombies. Luckily I had all of the resources from Arlogeist GmbH's zombie project at my disposal, along with a lot of human remains to keep them well fed. I won't get into how I came by those, but to assuage your fears that I might be a murderer let's just say it involved an accident at our Palm Springs whirling fan-blade facility. 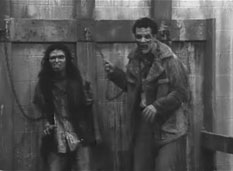 A pair of wisemen strain at the chains securing them from eating Meat-Baby Jesus.Since Christmas is, at its core, a religious holiday I decided to start things off by recreating the birth of Jesus with a little nativity scene. I was able to shape human limbs into a rough approximation of Baby Jesus thanks to a meat grinder and that pottery class I took at camp when I was ten. I placed the slightly rancid babe into the manger and spread a liberal amount of straw on the floor of my apartment. Then using plywood, ingenuity, and a little bit of what we in the industry like to call "love" (read: slave labor) I constructed a roof and three walls to represent the stable into which the Lord Our God was birthed. For the three wise men I selected three of the least putrefied zombies in Arlogeist's stock and carefully chained them to the wall. The first attempt at this failed pretty badly as the chains were too long and the zombies immediately set upon and devoured poor little Jesus. A few hours, some shortened chains, and a brand new CorpseChrist later I had this part down perfectly. The zombies knelt next to the manger grunting and clawing like animals, but couldn't get close enough to actually get at the meaty Son of God.

For Mary and Joseph I used two more zombies, one in a wig and the other with a fake beard and mustache, put them in robes and nailed their feet and knees to the floor. It was a painstaking process, particularly with all the struggling, only to realize that one of the zombies was actually a hobo that had wandered in while I was working. Luckily he got bit by one of the zombies and expired from blood lust and soon my nativity was complete. The finishing touch was putting animals in the scene. Since animals are expensive and zombies are plentiful, at least in my neck of the woods, I just used a Dremel tool to shape a few into rough approximations of goats and cows. Haha, don't worry folks, they didn't feel a thing. I spray painted them white and gray and moved them into position. They were pretty much immobile by that point, but just to be sure I gave them a similar treatment with a hammer and nails as to what I gave Mary and Joseph.

Some particularly loud Christmas music played in the background easily covered their moans of bloodlust. Now, looking over at my nativity, it feels like I have been transported back in time to the birth of Christ along with Bing Crosby singing "White Christmas".

If any of you are interested I may come back on Friday with some tips about decorating your tree and home Zombie-style. Here's a hint: it involves gasoline and knitting needles!

Resident questionologist Emily "Interpol" Reigel has taken some time out of her busy schedule of trying to chew through the restraints Rich has on her to keep her secured in his basment to answer some of your most challenging questions! From class to sass, this lady has all the answers, but you don't have to take my word for it!

The guys in the dorm room next door won't turn down their music, and the bass is shaking stuff off the walls in here. How can I get them to stop?

Kill them. This is a simple and elegant solution to your problem and you'll have nothing to worry about until the new people move in and start listening to music really loudly as well. But then you can kill them, and soon you'll be in jail where people will assrape you but you won't have to listen to that music because music won't be allowed in jail.

She really does have all the answers! Head on over and find out how to do stuff that you don't know how to do, especially if you asked her a question! If not, then just try to learn from the idiotic mistakes of others.