This is how I feel today. Notice my choice of wardrobe, especially designed to accentuate the positive features of my delicate and fragile face. Also check out my mouth, that thing is fucking huge! Ha ha ha!

I've recently fallen into a bout of what doctors call "Severe Technical Difficulties," a disease which can, at worst make your head explode and, at best, make your head and somebody else's head explode. You might have experienced this horrible illness before, perhaps around the time you woke up in a pool of some liquid that is secreted by one of your major organs. Symptoms include (but are not limited to) the following, uh, symptoms:

Unprovoked complaints about the recent weather

Headaches in the head or other areas of the body

Really, a whole bunch of stomach pains, even more than you can imagine

A sudden concern with adopting the Metric System

Okay, like imagine all the stomach pains that you can. Then add like 50 more to that. Do you see what I'm getting at here? We're talking severe stomach crap here, ladies and gents! 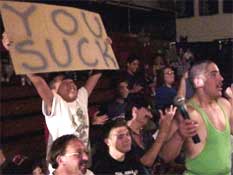 Show your support for SA by showering us with praise and neon green tanktops which make you look like a really large pistachio ice cream cone, only a lot more moist.

What I'm trying to say here is that I'm busy as all hornet hell and haven't really had much time to devote to writing the award winning comedy that one journalist called, "Award... winning... quality comedy... that is so good... it should never be allowed back on the Internet again. Ever." We don't remember who said this quote but if it was you please email us so we can give you back your pants and the copy of "Field and Stream" you left behind when the Police raided the place. We just upgraded the servers, we're pumping out and mailing high quality original merchandise (most of which has our website's name spelled correctly), and we've got the SA Forums going faster than a black man running from the law! See, that joke would be funny if I was black but unfortunately I am as white as chalk, so the remark makes me highly racist. Feel free to send me a harshly worded letter describing in detail how much you'd like to murder me and take my internal organs and replace them with low-grade substitutes imported from the same country that manufactured our t-shirts. Oh, and just to put us all on an even playing field, let me explain that I hate you white people too and you all embrace some hilariously over-exaggerated racial stereotype which I will comically reenact via a series of sweeping arm gestures and facial expressions which make it appear as if my spine was conducting 50,000 watts of electricity through its center. Also all you Indians out there suck. Not the Native American-type Indians, you guys are fine with me, except the one who did that silly crying public service announcement in the 80's. Hahaha, "Don't throw that plastic bottle on the ground, Dan! You'll make the Indian cry!" Dan listens to nobody! 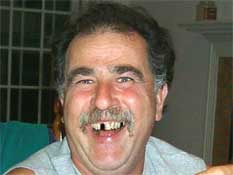 I don't have a caption for this guy! Maybe you do! I don't care!

The basic point I'm trying to get across is that I'm busy. Hopefully my schedule will soon revert back to the original Tuesday and Thursday updates that have made me a wanted felon in 13 states, but I am currently in the midst of Severe Technical Difficulties which are hindering my attempts to upload humor via FTP. I think it's because I'm using binary transfer instead of ASCII, but it might also be a cultural problem like gang wars or Louie Anderson. In the meantime, make sure to "give it up" for the guys who slave their free time by updating the main page of SA daily. Zack, Livestock, and Scott, you guys are the pillars that make up my three legged stool of rock-hard iron. Fragmaster is occasionally a pillar of a three legged stool of rock-hard iron, but not usually. Usually he's a jerk. Updating a website takes a surprising amount of time, and these young gentlemen are curtailing their daily intake of debauchery and defenestration so you, the viewer, may be served a red-hot cake of carefree laughs and screams of innocent children suffering for the sins of the past. I know I really haven't said it before in the past, so I don't think I'll really start now, but nevertheless I want to thank the donors, sponsors, writers, and contributors who make this site and the forums what they are today. As I look back towards October of 1999, the time when I began this wild ride of a rollercoaster I call "a wild ride of a rollercoaster I call 'a website'," I realize my eyes were full of stars. These floating symbols and overall ignorance blocked my view of the crashing Internet ad industry and the rise of a market where the only methods of generating cash through a website are from extortion or running drugs (not that I have anything against Gamespy). We've been through some rocky times; three advertising networks that have imploding owing me over $50,000 total. Of course I don't consider this to be "real" money since every single dollar back then was vaporware and about as concrete as my faith in L. Ron Hubbard descending from the clouds and giving me some kind of laser beam that immolates all the dolts who are infected by the Klez or Nimda computer virus and cause me to get email like:

Please wish myself a happy day,
i hope you have one to
enjoy This Filename.exe please
it is Safe run it Now use outlook Expres please. go Packers

So as you can tell, I'm busy and I'm thinking about laser beams, a combination of two items which will probably never ever result in anything positive. However, unlike this non-positive thing, I feel this website and community has just gotten better and better over time. The forums are 100% troll-free with a vibrant and strong group of users who routinely pump out the World's Greatest Photoshops (trademark pending). We've got a strong team of writers who are more than willing to give up their spare time by contributing to this site and entertaining people for free. This website is something we all take pride in and has outlasted countless obstacles, setbacks, and even outright sabotage. Ahhhh, just thinking of Sam Jain brings a tear to my eye. You know, the kind of tears you cry after spending the first night in a state prison with a 500-pound cellmate who has the name of an especially unpopular breed of dog.

While I'm getting all emotional and running around like a cock with his chicken cut off, why not support this website by purchasing a wonderful piece of merchandise from the SA Store or register an account for the SA Forums? Each penny goes towards the "Make the Ghosts Stay Away From the Server" fund which is currently running low. Nate, our server administrator, is now only armed with baking soda and some yarn. How will this all end? It's up to you, the viewer, to Choose Your Own Adventure© ! And let me repeat that one more time for legal testing purposes, Choose Your Own Adventure© ! Adios for now, suckers!!!

PS: Buy something. If you don't have a Paypal account, you can now use a check or money order, so no more excuses!

Review From the ROM Pit of Hell!

Braving the harsh world known as "utterly hideous Nintendo games found in the ROM Pit" comes Sir Heinfelst Alzartvortst von Strakktsz, who has the absolutely most ludicrous name ever. You know that when his parents hatched him or whatever they had only one purpose in mind for his professional occupation: MAD SCIENTIST. Seriously, that name contains so much German that it could easily take over Poland overnight. You Polish guys better lean out your windows and look out for a crazy German guy who's running around cursing the name "Aerosmith" and comparing the game Revolution X to the result of a train colliding with an abandoned orphanage which was recently un-abandoned and crammed to the brim with orphans who are artificially injected full of hope and joy, and after the train accident, pieces of metal too.

At a Glance: You know, it took me a long time to figure out why this game is called "Revolution X." I finally realized that it was because if they actually called it "Aerosmith: The Video Game," every store that carried it would get burned down within seconds. I mean, whose fucking idea was this, anyway? Does anyone even LIKE Aerosmith? Their fucking number one song is ten minutes of a guy screaming "DUDE LOOKS LIKE A LADY! DUDE LOOKS LIKE A LADY!" over and over again. Jesus, if I wanted to hear a song about John Romero I'd just go to Space Nerd Look-alike Wesley Willis' site and download an mp3 of "Eat Out Daikatana Man's Pasty White Ass, You Jerk."

Rock on! That is, rock on if you feel like it! And trust me, you do!