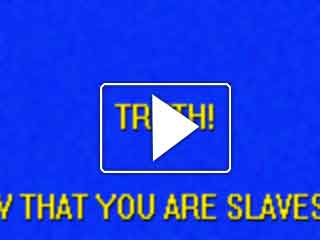 Description: Ascending chime tone accompanies a blue screen. The word "TRUTH!" appears on the screen and flashes nine times. It stops flashing and yellow text scrolls along the bottom reading, "YOU DO NOT KNOW THAT YOU ARE SLAVES. FREE YOURSELF." This must be a military transmitter because I captured a good twenty minutes of it. Several military tones intrude, probably jamming attempts, but the signal remains clear and repeating. It finally cuts off dead at the 21-minute mark.

Observations: This one broke into the local channel, so my guess is it's a military grade broadcaster on the other side of the Wall. Probably Unfolder propaganda. 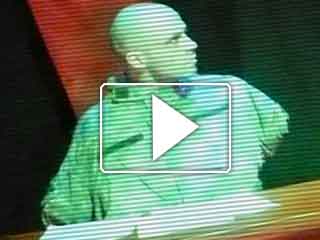 Description: This video cut in abruptly on Channel One with a loud high-frequency tone. It started mid-sentence and had bad audio that slowly cleared up. The video was washed out, but otherwise clear. It features a pale, bald soldier with one arm in a combat uniform sitting at a reviewing stand almost like he is in a courtroom. A deep voice from off screen asks him questions.

Voice: How did you die?

Soldier: Dead? I must have got lost. There was an explosion, I woke up in the hospital. What did you mean dead?

Voice: Where are you now?

Soldier: They said I was in Canada.

Voice: What were you doing here?

Soldier: I was part of a mission to, I mean, I can't, you know what I can't say.

Voice: Have you met any Unfolders?

Soldier: No sir, but we trained to kill them.

Voice: Are you sure?

Soldier: I'm sure of that. I'm not too sure of a lot of what you're saying, but that-

Voice: What if I told you I was an Unfolder?

Voice: What if I did this?

At that point a shadow falls over the soldier, he looks horrified, and the video cuts out.

Observations: A lot of the videos here could be faked or staged, but this one is especially creepy to me for some reason. The fact that the soldier is just sitting there apparently unaware that he is missing an arm, the way the shadow at the end of the video seems to...unfurl, the fact that I don't know of anyone who can act as well as this guy. If it's fake, the soldier isn't in on the fakery.