My Method's Retoric is TRUE and NOT responsible for anything 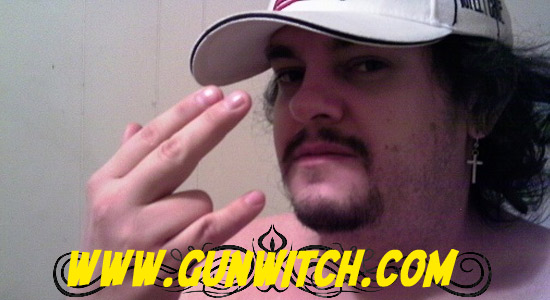 Gunwitch, here to school ya. You can check out my site www.gunwitch.com for the Gunwitch Method for targeting and firing on the sexiest game in town. Also I am currently seeking SKILLED probono legal representation for a misunderstanding with the Klamath Falls, Oregon Police Department which has brought LIES into my DOJO and falsely accused the Gunwitch of attempted bodily anger on a woman.

I have been following from afar the SHAMEFUL work of PUA nothing Jared Lee Loughner attempting MY METHOD and demonstrating a TOTAL lack of Inner Game. In a humiliating display of misused Gunwitch Method that got NOBODY laid and allegedly killed or injured some more than a DOZEN people Jared disgraced MY method. If you've tried other methods and failed it's no surprise because these other methods only work on less than 1/1000th of 1 percent of the USA population.

First of all I declaim ALL pretensions of knowledge of this Jared Lee Loughner. He never asked me advice and I never told him how my method works. He INTERPRETED my grammar WRONG which is his right in a free world.

Allow the Gunwitch to educate you on why this pretender to the throne is nothing but a fool. Way of the Gun WORKS and is PROVEN.

Way of the Gun

Even PUA amateurs know by now that if you got to work game in public you NEVER approach a group in broad daylight. You become the center of attention of the entire group if you follow my method, just a MAGICIAN on the STAGE. You don't want that. You want to precisely TARGET and DESTROY your game.

Shooting a child is a bad open. If you neg too hard you will enter a CRITICAL NEGDOWN which is what Jared found himself in. There are ways out of these situations but an amateur like Jared who knows NOTHING (0) is doomed to become TRAPPED by his own negs. If overneg to CRITICAL you will enter a NEG SPIRAL. In a group this can be a deadly scenario for getting laid. Way to ruin the game.

This Jared character jumps right to putting the CROSSHAIRS on the girl of his dreams. Jared, Jared, Jared, obviously you need to study more carefully. You can't approach, neg, and skip straight to shooting your woman in the face. You have to use what I call a STEP-DOWN where you neg, neg, neg, invade her personal space, touch her first in a common place (arm, shoulder) and move gradually towards more intimate locations (top of buttcrack, mouth, eyes) when she feels VIOLATED that is when you spring the GUNWITCH SECRET NEG. Not before. You have to run the STEP-DOWN, Padwan.

Just a little sextra tip. You probably should only run my method on national politicians if you are at SEXPERT and above levels. Jared is NOT my responsibility. A true follower of the Way of the Gun would have, AT MOST, shot one woman in the face.