Karl Pilkington: A Really Dumb Guy You Should Know About

A lot of people know who Ricky Gervais is. If you don't, he's the fat guy with the beard in the British version of The Office, and also the fat guy without a beard in Extras, and the fat guy with a British accent who occasionally shows up in bad Hollywood movies apparently made by friends he owes favors to. In any case, Ricky Gervais also is sometimes a fat guy with a radio show, alongside his friend and co-writer Stephen Merchant, who isn't fat but is instead freakishly tall with bulging eyes. 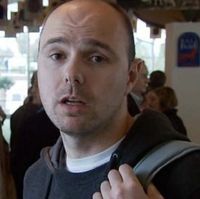 The radio show ran for a few years, and then moved into a series of podcasts which at least some of you must have heard because they are the Guinness World Book of Records's "Most downloaded podcast ever", which is almost as impressive a record as, say, "Longest time spent looking at a truck". At first the show was just the two of them talking, but they soon discovered that the man the radio station had assigned to produce the show was possibly the most entertaining man to have ever lived. His name: Karl Pilkington.

From that moment on, the show became about them listening while Karl talked. And talked. And talked. Right around then, it also became the best radio show ever made. Karl is very stupid. He also, Ricky Gervais is fond of pointing out, has a perfectly round head. But mainly he's truly and sincerely dumb, in the most innocent and childlike way possible. Everything that comes out of his mouth he honestly believes, and everything that comes out is bizarrely wrong.

Listening to Karl, you begin to wish that you could live in his world. It is a world in which chimps not only understand English, but direct films, drive cars, and perform laser eye surgery. It is a world in which nursery rhymes, scientific fact, and random headlines he read off of Russian tabloid websites freely blend with each other and become all equally true. It is, without a doubt, a better world.

I don't really have any jokes to tell about Karl. I wrote this because I'd just very much like for you, the reader who is reading this, to get know him a little better. To help that process, I've come up with a little game.

I will list sets of five quotes. In each set, only one or two quotes are real. See if you can identify the real ones without cheating.

Can you tell: Which does Karl actually believe and which did I make up?

1. "It's just that gays, I think it's something like they have their brains backwards in their skulls. Just like a normal brain, but put the wrong way round in the head."

2. "I like messing about with search engines. I just typed 'why' into it once to confuse the computer."

3. "I think it would be better if when an old lady dies at 75, she has like a little baby that's been living inside her that comes out, so we never have more people then we had before. Or maybe we could just inject something in her head after she died so she'd start living backwards and be young again. I mean, we don't have to do it if you don't want to."

4. "I wonder about blokes like Ghengis Khan and Alex, you know, the Great, and all that, if any of them went to the same school and used to fight each other over lunch and stuff and then they grew up and fought over whatever they fought over."

5. "No, it's just that before the chimps went up in the space ship tests and that, they asked the Bigfoot because of how close he is to humans but he was scared of heights."