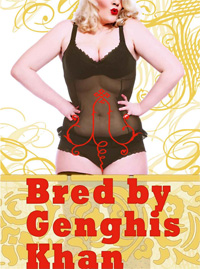 Much like the centaurs of last time around, Ferris Khan likes to use some elaborate furniture in his breeding program.

It was a large room, dimly lit by candles and decorated in red velvet and gold trim. At the center of the room was a tall wooden stand. Mina sucked in her breath. It looked ominously like the breeding stands she used back home to mate the mares with the stallions.

This is also where Mina breaks the chair:

"I...I don't know what happened," she breathed. It was then she noticed that the cushioned straps were still on her arms, as were pieces of the broken wood attached to them. Mina followed Ferris' disbelieving gaze to the stand. She had ripped it apart.

"Now grab me a pillow so I can prop it under my hips. We've got to let this stew simmer."

Also from this author: Forced and Milked by the Vikings