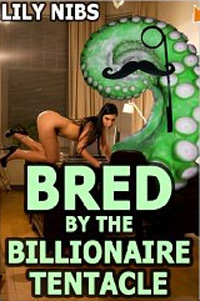 50 Shades of Goo: Bred by the Billionaire Tentacle
By Lily Nibs

50 Shades of Goo represents a rarity in Kindle books: intentional comedy. There are plenty of failed attempts at humor on the Kindle and a lot of unintentionally funny Kindle books, but not too many that self-parody and succeed.

This on-the-nose gross-out parody of pretty much every other billionaire/tentacle breeding atrocity works as a combination of Atlas Shrugged and Day of the Tentacle with some smut thrown in. Not "classy" smut either, like Fifty Shades or even Penthouse Forum. This is Club Magazine level, where they make up words for vagina like "snurt" and "goodge" and refer to "fart sounds" during sex.

I looked down at my shoes nervously. This was Rourke Holding I was talking about - he was rich enough to buy America five times over. He'd invented the internet all by himself, and within a year it'd be on every computer in the world.

Why would he be interested in me, a simple secretary?

"BllllMMMMF," he responded. God, his voice - it sent shivers down my spine. It was like a wet sponge going through a grinder. "gllmmPH, twwl."

Rourke Holding is a giant tentacle that wears a monocle so people know which way he is facing. Claire Hogan was concerned about what would happen during breeding.

I'd been worried about being propelled off the end of him as he unleashed a virtual geyser, but suddenly the purpose of his suckers became apparent to me; each and every one of them attached to me, and I couldn't have moved if I'd tried.

The subtext of the book's dialogue seems to be that Claire Hogan is insane and walking around an abandoned skyscraper talking to an inanimate object and imagining the romance.

"You know that if I'm around all day you're never going to get any work done. If we're going to continue...this..."

"...then you're going to have get a new secretary."

Against all the odds, I was shocked for one last time. I hadn't even realized he had a son.

Before coming to work for Rourke, I'd skimmed his autobiography, so I knew exactly how much he enjoyed the musical stylings of The Mountain Goats.

Also from this author: The Nun Who Loves To Fuck