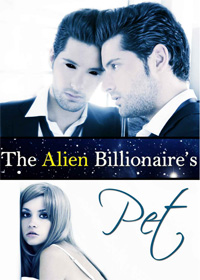 Fifty Shades of Grey kicked off a tidal wave of Kindle imitators. Searching for "billionaire" in the Kindle store turns up almost 3,000 results and almost all of them are Fifty Shades knockoffs. If you're a woman with a boring sex life and you're looking to spice things up in the bedroom by reading rebranded Twilight fanfic you have a bewildering array of choices.

If you're a little more discerning and you're looking for a Fifty Shades knockoff with something extra, Amelia Amberson has just the thing for you. The Alien Billionaire's Pet is the classic story of romance between a young woman and a murderous alien billionaire she met in an alley. The heroine of the tale is on her way home with a bag of Chinese food when she is attacked by a raperman. She is saved by a billionaire alien named Kristophe Maximillian Cross.

Yeah, you read that right, the alien billionaire is named Kris Cross.

"But I told you a week ago I have a dentist's appointment."

He flashed his black eyes and said, "No, Darlene, I need you to close."


After brutally killing the rapist and hosing the heroine down with blood, Kris Cross decides that her ruined Chinese food needs to be replaced.

Before I could defend my honor as a mostly-honest person, he pushed a button. The partition between us and the driver slid down.

"Order some Chinese, Meyers. Sweet and Sour Chicken, vegetable fried rice, and fried chicken wings." He turned to me and asked, "Coke or something else?"

"Coke," I answered automatically, unnerved yet touched that he was replacing the same food I had lost.


He smirked again. "You'll learn soon enough. For now I'm Master to you in all things and especially when you're in my bed-but only if you've been a good girl."

A blush flamed across my cheeks and throat. Master? In his bed? Good girl?

Could an entire book be rhetorical questions? How would you write the action? Would a single, indecisive monologue suffice? What is the best way to kill yourself?

I just couldn't believe this is what was going to happen to my life.

Also from this author: Lust in Space - Punished by her Alpha Commander