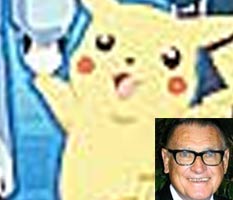 He is friends of the dinosaur and talks in tongues! Take this off the air! The small picture is me not believing what I am seeing! Actually, I am joking, but I shouldn't joke - this is serious stuff folks!Welcome back to "The Straight Truth Show", I am Phinneas J. Tolerance and I am your host on this learning experience! I am truly a man of multimedia now; I am told not only is this important message going out over the tingling airwaves of 1480 AM WRRR "The Whir!", but also on the web site of Mr. Rich Kanatka called "Something Ample." I received a number of letters on my Packard-Bell Pentium after my first appearance on this web site and I apologize for not getting to them, but I had to have 2 feet of my small intestine removed because of a bowel obstruction. The doctor said it was caused by eating too many fritters but I am placing the blame firmly on the head of Satan because I know how much my words get under his red skin!

As usual I am getting a bit off topic though. This show is about kids these days and the corrupt slop those folks in the "entertainment industry" are trying to pass off as "entercation". I was visiting my young nephew Phile last Funday (that's what I call "Monday"!) and saw that he was watching a program on basic cable. Already I was wary because basic cable is a refuge for those already damned to hell, especially that no-good "Fox Family" network, marauding the airwaves in the guise of true family programming like group prayer and self-inflicted stigmata. He was watching a cartoon! It says quite clearly in the Bible (Psalms 3:19) that "an image of man shall never be recreated in the company of an image of a dinosaur or reptile." Much to my surprise there was also a little boy in a baseball cap, which is dubious but I would let the cap slide if it weren't for the dinosaurs! All over the place!

What was worse was that the dinosaurs seemed to be speaking in one of the forbidden tongues, possibly even reciting blasphemous scripture, although I can't be sure because I wouldn't let those words pollute my eyes. For those of you who are not "in the know," a dinosaur is like an angel of the devil. They came up to this earth and managed to fight off the god-fearing Christians and rule the world for almost 75 years before Moses defeated them. He led the Christians from their slavery under the cruel dinosaur overlords so that you and I could walk freely down to the corner diner and sit and enjoy a hot cup of joe! If you were not aware of this, I suggest you go to your local library and check out a copy of Simon Joseph's book "Evolution: Moses and the Dinosaurs". 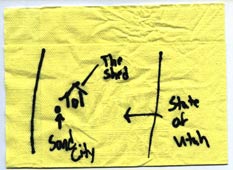 I found this in my scrapbook. I think it explains what I'm talking about.The dinosaur kept shrieking words that sounded like "charmonster" and another yellow dinosaur would shriek back "pecker chew". I tell you, I always thought I was a hardened man since that time behind the shed in Sand City, Utah, but this really shook me up. Sand City, Utah. Anyway, I immediately unplugged the TV and sent my nephew to his room to pray against the deviltry he had just been exposed to. Knowing that evil might be afoot in the house I set about examining the book shelf. I removed a few copies of books by that Depack Choprah character and a few others that offered "chicken soup for the soul" without mentioning God and Jesus explicitly in the title. I then sat down in front of their Packard-Bell and began to inspect it for signs of things a Christian should not have on their Packard-Bell Pentium. More on this after a short break for commercial and station identification.

I have to do this advertisement to keep my show going. Have you been driving the same car for years? Do you want a new lease on driving pleasure? Come on down to Flashin' Joe's Car Barn, conveniently located next to Kessling Airport Toyota off I-266. Look for the barn with the car on top of it and we will get you a deal you can't refuse! We have new cars and used cars at unbelievably low prices. So low you will think we signed a deal with the devil himself!

Oh I can't believe that! Ladies and gentlemen I do NOT endorse Flashin' Joe's Car Barn. If Joe even claims to be in league with the dark forces of H-E-double-hockey-sticks, I think we should organize a group to shut him down. This is WRRR; "The Whir!", home of the hottest tunes and the coolest hits from 1964-1966! Once when I was taking a bath and reading scripture in the tub I dropped the Bible into the water. At first I thought it was a complete disaster, but when I managed to recover the sopping tome from beneath my ample posterior it was opened to a page (Corinthians 2:13) describing the test of water that God put Mortilla through on the mound of Dogata. Aha! So it is like this with Joe's Car Barn. Lord, you do work in mysterious ways! 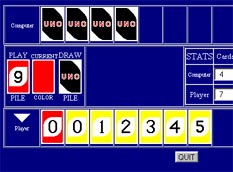 BAM!!!Back to the matter at hand! The first thing I saw was a game called "Solitaire" which I had read much about in "Christian Teen Quarterly" as it promotes idleness and sloth in the younger generations. If you have no work to do you should spend your time either further serving the Lord through charity work, prayer, or quiet contemplation. I spend my free time either praying or suspended from my nipple rings in my Prayer Harness. Each ring is inscribed with the name of a saint, the left nipple is Saint Christopher and the right nipple is Saint Sebastian, as the harness tugs painfully on my chest I am reminded of the suffering each Saint endured in service to Our Lord. My masturbation and subsequent ejaculation is a symbolic apotheosis, joining with the Holy Father in a union born of chaste servitude.

I tried to delete this "Solitaire" program, which looked suspiciously like pagan Tarot cards and not at all like Christian Uno cards. I was unable to banish it back to the netherworld, but I was resolved to do something. I immediately began pouring cups of water onto the typewriter part but the cards remained on the screen! Satan is never easily dealt with! I had half a pint of my gin remaining so I poured it onto the box part that sits next to the desk, although mine sits under the monitor which raises a question as to if the vertical construction of a Packard-Bell Pentium provides an easier haven for heresy. Finally the beast of a machine began to spark and burn, belching the black smoke of hell across the triple stain-resistant pour-perfect carpet I had personally sold my cousin. I knew the ash would clean right up, but that particular carpet has a fairly low flash point. I poured a bucket over the whole sparking mess and finally the demonic conflagration died away.

The gentleman who operates the equipment to record this show has just handed me a note explaining that the station manager has insisted we wrap up this broadcast quickly. The lesson, ladies and gentlemen, is that evil can be anywhere, even with your family! It is insidious and silent, like the rash that forms beneath the leather of an untended genital ring. You must deal with it carefully but ruthlessly!