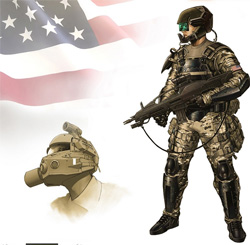 The woman senator cringed behind the desk as 7.62mm rapid fire slammed into the wall behind them. Victor Turner activated the echo-locator in his wraparound AUG display, bringing up the positions of the five men from Opsoya. The vegetarians were outlined in red on his tactical TechOps Map. He selected them with a blink of his eyes and tossed a thermobaric seeker into the air. The drone's micro-engine whirred to life as it curved through the door and around the cover the Opsoya assassins were using. The charge detonated with maximum efficiency, leaving three shredded, smoking corpses. The two remaining Opsoya men began to pull back.

"They're retreating," said the woman senator.

"No," said Agent Turner, with a scornful shake of the head. "They're pulling back outside the blast range. They've set a charge."

"A bomb? Maybe we can negotiate with them," said the senator.

"Madam senator, as an agent of CIA TechOps I am sworn to save your life, so please accept my apologies in advance."

"For what?" asked the woman senator a second before Agent Turner punched her in the face and knocked her out. He slung her body over his shoulder and activated his suit's laser cutter. It mapped the precise shape of his body and the senator's and began burning through the back wall. Victor activated his com gear.

"I hope you're in position, Chavez." 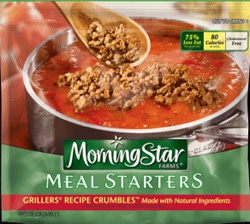 "You know it," said Sara Chavez, Ding Chavez's daughter, over the radio. Just as the bomb exploded, the laser cutter completed its tracing on the wall and Victor and the senator were blown out through a perfect hole and into the bay of the vectored-thrust attack gunship Mk19 Ho-Chunk being piloted by the sexy Latina Marine Sara Chavez.

"Is the party ready to start?" asked Victor as he buckled in the senator.

"You know it," said Chavez. She pointed to the cooler in the back. Victor threw it open and found 16 bags of Morningstar Farms® Meal Starters Grillers® Recipe Crumbles" "You did good, Chavez. This is just the sort of meaty, beef-substitute I need for all my recipe favorites, including my infamous five alarm chili."

Chavez shook her head as she guided the gunship out of the ruins of Washington D.C.

"After today, you'd better make it four alarm," she said.

They laughed, although they weren't exactly sure why.

You can read more of Zack doing impressions of better authors on his Facebook page.