The 2001 cinematic classic Rat Race came to a close like no movie had before by suddenly introducing the band Smash Mouth as the narrative's deus ex machina. While this madcap comedy was largely panned by reviewers, over time, the world has come to appreciate the truly unexpected finale moviegoers initially responded to by throwing their theater waste at the screen. 15 years later, this newfound recognition of Jerry Zucker's brilliance raises the question: What other movies could be improved by the surprising entrance of Smash Mouth? 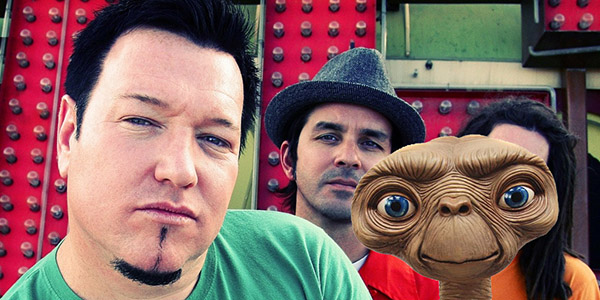 Elliot and E.T. say their tearful goodbyes as the wrinkly alien's mothership descends from the night sky. After imparting the immortal words, "I'll be right here," E.T. shuffles away towards the silhouetted figures beckoning to him from the craft. As Elliot chokes back sobs and the ship takes to the skies, we immediately cut inside the UFO to see five very E.T.-like figures standing in solemn reflection. After few moments pass, they begin wryly nodding to each other, and suddenly, the bulky alien costumes drop to the floor to reveal... Smash Mouth! The band immediately breaks into a rollicking, radio-friendly cover of Frank Sinatra's "Swingin' on a Star" as E.T. himself performs a number of popular--and hilarious--dance moves over the credits.

Jake Gittes' long journey comes to a depressing end when one of the women he's trying to save is shot through the eye while escaping via car, leaving her daughter/sister to be carried away by the nefarious Noah Cross. Jake's feelings of powerlessness are only compounded when he hears the immortal line, "Forget it, Jake. It's Chinatown." We quickly pan to a nearby gas station, where five seemingly innocuous attendants service a car. "Like hell it is," says the larger member of the group, then nods at one of his companions, who pulls a cherry electric guitar from behind his back and proceeds to play an epic power chord. Suddenly, Evelyn's car erupts in sparks, and she climbs out of the driver's seat, shouting, "I'm okay!" Cross can only pull off his cowboy hat and stomp on it as Smash Mouth plays a rollicking, radio-friendly cover of David Bowie's "China Girl" over the credits.

After living a hateful, petty life in his goal to dominate the oil industry, the robber baron Daniel Plainview is visited in his personal bowling alley by Eli Sunday, an old acquaintance who's come to pathetically beg for money. After an extended milkshake analogy, Plainview bludgeons Eli to death with a bowling pin, and exclaims, "I'm finished!" Before the credits can roll, five familiar figures enter the frame, fully decked out in bowling apparel--it's Smash Mouth! Lead singer Steve Harwell lifts a bowling ball to his chin, saying "You're not finished just yet." The band launches into a rollicking, radio-friendly cover of Accept's "Balls to the Wall" while a lighthearted bowling montage featuring Plainview, Smash Mouth, and the ghost of Eli plays slightly to the right of the credits.

Following the brutal showdown with his alter ego, Tyler Durden, Jack has no choice but to watch his city's financial buildings crumble to the ground as Project Mayhem accomplishes their end game. After Jack tells Marla, "You met me at a very strange time in my life," we immediately zoom outside to a very familiar maintenance crew of five on the city street below. The lead man removes his safety helmet to reveal himself as Steve Harwell of Smash Mouth, who gently shrugs to the rest of his friends, quipping, "Well boys, guess we better get started." A rollicking, radio-friendly Smash Mouth cover of Starship's "We Built this City" starts playing as the band members roll up their sleeves and get to work restoring the fallen buildings. As Harwell puts the final brick into place, Jack slips an engagement ring on Marla's finger and we heart-iris out to the credits.

After a night-long standoff against a horde of zombies, the noble Ben emerges from the dilapidated farmhouse as the only survivor. Before he can alert the authorities, he's mistaken for a zombie and brutally shot through the head. But doesn't that shooter look familiar...? Yes! It's Steve Harwell from Smash Mouth! Suddenly, he and his posse drop their rifles and pull musical instruments from the trunk of a nearby squad car. They break into a rollicking, radio-friendly cover of The Cranberries' "Zombie" as Ben, Barbara, and the rest of the corpses come to life one last time to dance their hearts out. Before the smash cut to the credit, Harwell looks back to the rest of the band and says, "See boys? Told you we could raise the dead." The end?