Immediate Action Must Be Taken Against the Stormbeard Family

As you have received my previous letters reprimanding Mr. Stormbeard, you have a thorough record of his misdeeds. Mr. Stormbeard has not cleaned up his act and only grown more brazen in the interim. Please allow me to share some of the Stormbeard family's latest escapades. I believe they more than justify my enlisting of Mr. Thecodont.

As I noted in my last letter, Mr. Stormbeard's estranged wife returned home. Her arrival sparked a fresh wave of violent, supernatural events. As the couple bickered and argued, the entire neighborhood seemed to quake. This problem has only intensified with the arrival of Scott, Mr. Stormbeard's teenage son.

Scott Stormbeard is just as antagonistic and disrespectful as his mother and father. From what I have learned, he was kicked out of wizard school for disobedience. It's easy to see why: he routinely blasts his music loudly, parks his dirt bike in the family's front yard (what's left of it, anyway), and has committed several acts of grafitti vandalism. I also suspect that he's breaking into some of the vacant houses, though I cannot prove this.

I have on six separate occasions personally observed Scott smoking marijuana cigarettes in the family's backyard. I need not remind you that the neighborhood charter strictly forbids the buying, selling, and consumption of drugs. We all agreed to keep Shady Vale a drug free zone. There should be zero tolerance for this sort of thing. Zero tolerance.

I should note that the condition of the Stormbeard backyard has deteriorated greatly. It is now apparent to me that, in addition to his attitude problems and criminal behavior, Mr. Stormbeard is a hoarder. I counted no less than 26 derelict exercise bikes in his yard, along with a large stack of wooden treasure chests filled with old, soiled robes. When I confronted him about this, he grumbled and insisted that he was going to repair all those bikes and give them away as gifts.

Speaking of robes, Mr. Stormbeard has been leaving his hanging wide open. He often wanders around outside, exposing himself to any unfortunate passerby. This sort of lewd exhibitionism has no place in Shady Vale or any neighborhood. With such a hideously irresponsible father, it's no wonder Scott is such a troubled teen. 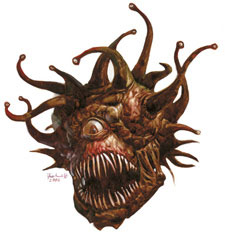 As I reported in the past, Mr. Stormbeard's guests have a tendency to spill into my yard. As he is prone to discarding magical artifacts with little regard for the consequences, he has attracted the attention of all sorts of otherworldly beasts. Just the other day I had the unfortunate task of chasing away a Beholder that was defecating a mere three feet from my front porch. I managed to swat it over the head with a newspaper a few times. These sorts of terrifying monsters are always lurking around his yard, picking through the abundant piles of garbage. It's only a matter of time before they start venturing further away, perhaps to the nearby elementary school.

As you can see, action can no longer be differed. The alternative is too dire and unacceptable to imagine. Thus, I am giving you until the end of the month to levy appropriate fines against Mr. Stormbeard and bring him into compliance with the neighborhood charter. If you do not, my good friend Mr. Thecodont is more than prepared to bind the entire Stormbeard family to the crystal that he's building in his garage.

I would just as soon this matter be handled in a civil fashion that adheres to the laws and standards we all pledged to uphold. If these earthly laws no longer interest you, then I am prepared to fight magic with magic. I beg of you to do this the right way. Let us restore this neighborhood to glory with hard work and discipline and not the shallow forces of magic.

Thank you for your time. I trust you will do the right thing.