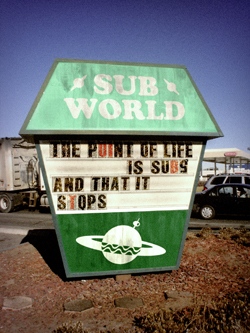 He was the last customer of the night. A squat bald man with a thin mustache and worried eyes. He'd materialized from the gloom of the parking lot like a ghost. The electric ringer on the door had made no sound when he walked in.

"Sorry I came in so late. I just realized I have no food in my fridge. Or actually it's my mom's fridge. I live with my mom."

He was slouched over the counter, watching me make his sub. His face was creased and life-worn, wrought with a desperation longer in years than its host. He wore purple sweatpants and an ash-gray sweatshirt; a bloated paunch poked under the hem. I wrapped his sub and shot hate-beams at him with my eyes: he was standing on the square of tile I'd been mopping for hours, the one she'd stood on when we met. All night I'd been thinking about her, set to accordion dirges and pictures of three-legged dogs. I looked at the grease hose in the corner and thought of how easy it'd be to stick it up my nose and suck out the part of my brain that felt pain, followed by the rest.

He kept talking. "And you're the only place open besides Sub Hut, and I can't go there anymore."

"What?" I put the sub on the counter. In my dissociative fugue I hadn't been parsing his sentences.

"What?" He looked confused. He apparently wasn't used to acknowledgment.

"What were you saying?"

His eyes flitted across the room, then at his shoes. "I don't want to talk about it."

"Okay, if you have to know ... I went there one night and had a really good sub." His voice took on a graveyard quality, distant yet confessional, like an anonymous craigslist personal. "It was perfectly cooked, perfectly wrapped, totally transcendent. But when I finished it, everything just seemed ... pointless."

"Pointless?" I stared at him. "You mean you were full."

"Not full exactly. I mean kind of. But it was like I was so full ... I was empty. I knew I'd never have a sub that good again. It felt like my life had peaked. Like everything else would just be a postscript."

My eyes narrowed. "But it was just a sub."

"You don't understand. It wasn't just a sub, it was the best sub of my life." He started trembling. Tears formed in his eyes. "It showed me just how pathetic the rest of my life is. It was like ... like being lifted above a desert, just long enough to look down and see how vast it really is."

He dropped his sub and sat down on the lobby bench. He cupped his face - the borrowed face of a man defeated - in his palms and started crying. His choked sobs resembled the sound of a straw sliding up and down in a fast food cup. Something in the sound pierced me, gave me a hollow-hearted feeling, like...

Another feeling, this one much different, filled my head. I walked around the counter, past the cash register, and into the lobby. The plastic bag with his sub lay on the floor, crumpled and forlorn like the rind of some bitter fruit.

I picked up the bag by the plastic handle. I walked over to him and put it in his hand. He looked up at me with wet, bloodshot eyes.

"Look," I said. "Subs aren't meant to last. That's the point of them. That's why you savor them and look forward to the next one. And even if there is no next one, that's no reason to get depressed. Why not just be glad you had it to begin with?"

He looked at the sub and wiped his face with his sleeve. "I ... I guess that makes sense." He took the napkins out of the bag and blew his nose. He dropped them on the floor, then looked at me and picked them up. "Sorry."

I sat down next to him on the wooden bench.

"You know, I just got out of a relationship," I said. "I've been going through the same thing you are. But you made me realize something: there's no point in living in the past. Otherwise, everything just feels dead. Dead and hollow. Like a labyrinth with-"

"Yeah, there's not much point in you staying."

He shuffled out the door. I caught one last glimpse of the Sub World logo, emblazoned on his bag in ephemeral red, fading into the wind-ripped winter night.

The store was silent, save the drone of the grill fan and the hum of the soda cooler. I now knew what the center of a labyrinth felt like.