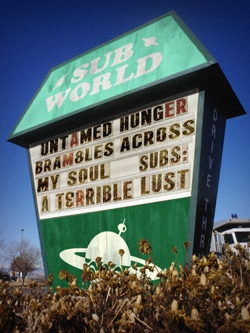 We drifted apart. It happens.

One day a coworker told me they'd seen her at Sub Hut; she'd been eating subs with someone else.

For the next few days, thinking about her sent me into paroxysms of hate and lust. I started playing the 'what if' game, wondering if we'd still be together if I'd just done a few things differently; and there are no winners in the 'what if' game: Like a wacky '90s game show where you start with a million points and have to get down to zero, it's always played to lose.

I got really high on Splenda one night and wrote her an email:

You never returned my last few calls. I hope you don't hate me, although if you do that's okay. I'll admit I hate you sometimes, not as a person but simply as an imperfect carbon of the larger thing you represent, which is Sub Hut. I had a really bad experience at Sub Hut one night when a teenager with spiked hair and a Blink 182 t-shirt threw fries at me and called me a capitalist slut and drew an anarchy symbol on my table in ketchup. Ever since then I've had a negative impression of Sub Hut - and Blink 182. Which is too bad, because I like in principle everything about their music from its energy to its DIY aesthetic to the politics behind it. It's funny I guess how one person's insensitive actions can destroy your faith in a larger transcendent concept, one that might've at one point had the power to save you but now just feels stained with that person's image.

PS: I'm writing this pretty high so it might contain spelling errors and emotional stuff I wouldn't normally share. Fortunately I won't be sending it until tomorrow, so I can fix the spelling errors then.

I worked double shifts the rest of the week. Making subs helps me remember the importance of forgetting.