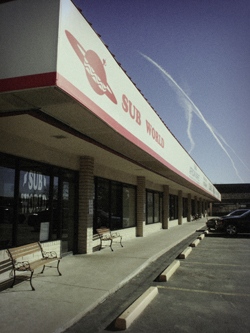 But it was okay. Maybe she was right, after all. Maybe life is a centerless labyrinth, like a special stage in Sonic the Hedgehog without a chaos emerald. Who said there has to be anything in the center? Maybe, like a sub, everything is meant to turn to excrement. Maybe we're all just fat, tumid globs of numbers and language gorging ourselves with future stool and should just enjoy the meal before the check comes.

Why can't a good sub be an end in itself?

I stood up and walked over to the door and locked it. Outside, cars drifted by. Streetlights hovered in the gloom. The lobby speakers were playing "Dream Warriors" by Dokken, the hard-rock anthem she'd suggested should be our song. I thought about the guitar line, the lyrics she'd murmured in her sleep. Her hair, her face, her mastectomy scar. Everything.

There was no pain.

But something still wasn't right. Some answer still eluded me. How could two people be lovers one day and bitter enemies the next?

Then it hit me: there didn't need to be an answer. Like Final Jeopardy, only the question really mattered, and only the people asking it could see the truth. Love would come and go, existence would outlast itself; it was all parenthetical, as long as I had the one thing that made me alive. I turned off the lights and prepared to close the store.

I had signs to hang. 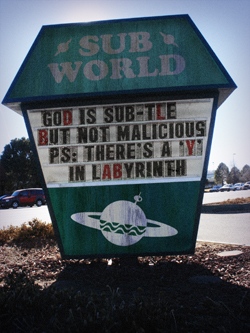 Thanks to Ian at Fused Muse for the signage! It's the 20th story he's illustrated, which means he gets a tote bag!