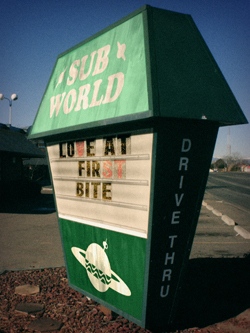 It was cold; a creeping, soul-eating cold that squeezed you from all directions like a hug box for autism therapy. It pressed against the windows of Sub Hut and followed us into the lobby where we kicked the snow off our boots and hung up our coats.

"This place is so much better than Sub World," she said. "No offense, but Sub World is terrible. I wish a UFO would crash into it and it would explode. Well, I mean it'd have to be on a day you weren't there. I don't want you to explode."

I smiled and caressed her cheek. "I don't want you to explode either."

We both laughed. We'd surpassed the point of having to call love by name. Or at least any of the names people knew, which left only shadow whispers and arcane clicking sounds. She hooked her arm around my waist. We'd been seeing each other for a week; this was our first official date. I tried to remember the last few days, but aside from the general abstract it was a whitewashed page in my memory. Love, I realized, was like anesthesia, explaining why I had a fetish for female anesthesiologists.

We got our subs and sat at a table in the corner. An hour ago, we'd snorted Splenda packets in the Sub World bathroom. I had the warm, vitreous feeling of china bones in a soft blanket of skin.

"How do you write about pain so well?" she asked. "Because I've noticed that all of your signs are about pain, in a sort of winding, anfractuous way."

"I've had a rough life." I sipped my soda. "When I was 16 I saw a preview for Jazz Jackrabbit 2 that said it was like Sonic the Hedgehog on crack. And I did the math and realized that instead of buying the game it'd be cheaper to just buy a used copy of Sonic the Hedgehog and some crack. But that led to a paranoid hallucination where I thought Tails was going to stab me."

" ... I'm sorry. I feel the same way about life. It's like a labyrinth with nothing in the center."

She nodded. "I have it tattooed in tiny letters above my labia."

She took a bite of her sub, then put her hand on mine. It felt creamy and smooth, from the mayonnaise. She was wearing a black dress, sleeveless with lace around the arms. Her legs were crossed: one swung freely, her pointed heel half-off and dangling precariously. The other heel tapped on the floor in a syncopated rhythm that served as a breakbeat to my heart, which cycled furiously; fueled by Splenda and a thousand lonely nights, but primarily Splenda.

"Are you having a good time?" She said.

"Absolutely. The subs here are great. You should get a Sub Hut rewards card though. It lets you earn points with every purchase."

"They give you points toward free subs."

"I know, but I never understood the concept. Why does every pleasurable thing have to be instrumental toward another pleasurable thing, whether it be a free sub, a large soda, or a Sub Hut tote bag or other merchandise? Why can't a good sub be an end in itself?"

"You know what I just realized?"

"You're beautiful." I stroked the top part of her hand where her fingers came together. "And if you had a nurse's hat, you'd look kind of like an anesthesiologist. I'm really attracted to them. I think it's a sublimation of my fear of unanesthetized surgery."

She smiled. She held up her sub so I could take a bite of it; I did the same. All around us, people were eating, packed into booths or hunched over tables that sprouted from the wall on steel beams. A lesbian S&M couple fed each other French fries on plastic hooks. A tracheotomy patient laughed at a joke and soda shot out his neck-hole. An old man was reading a newspaper and had something that looked like dried orange Tang around his eyes.

As they gorged themselves with MSG and ground beef, a synthesis took place. Their insular celebrations fused into one, a communal banquet to ephemerality. As subs were devoured and soda flowed like the waters of Babylon, new dreams were courted, replacing tired old ones that had outlived their welcome. Death could never be thwarted; it was the infinite denominator under the vinculum of the soil, defining life's brevity just as life defined its vastness. Never was this more apparent than when I was with her, but never, either, was it more bracing. Her eyes were like jewel-studded kiosks, faint eternal bonfires to life's undying transience.